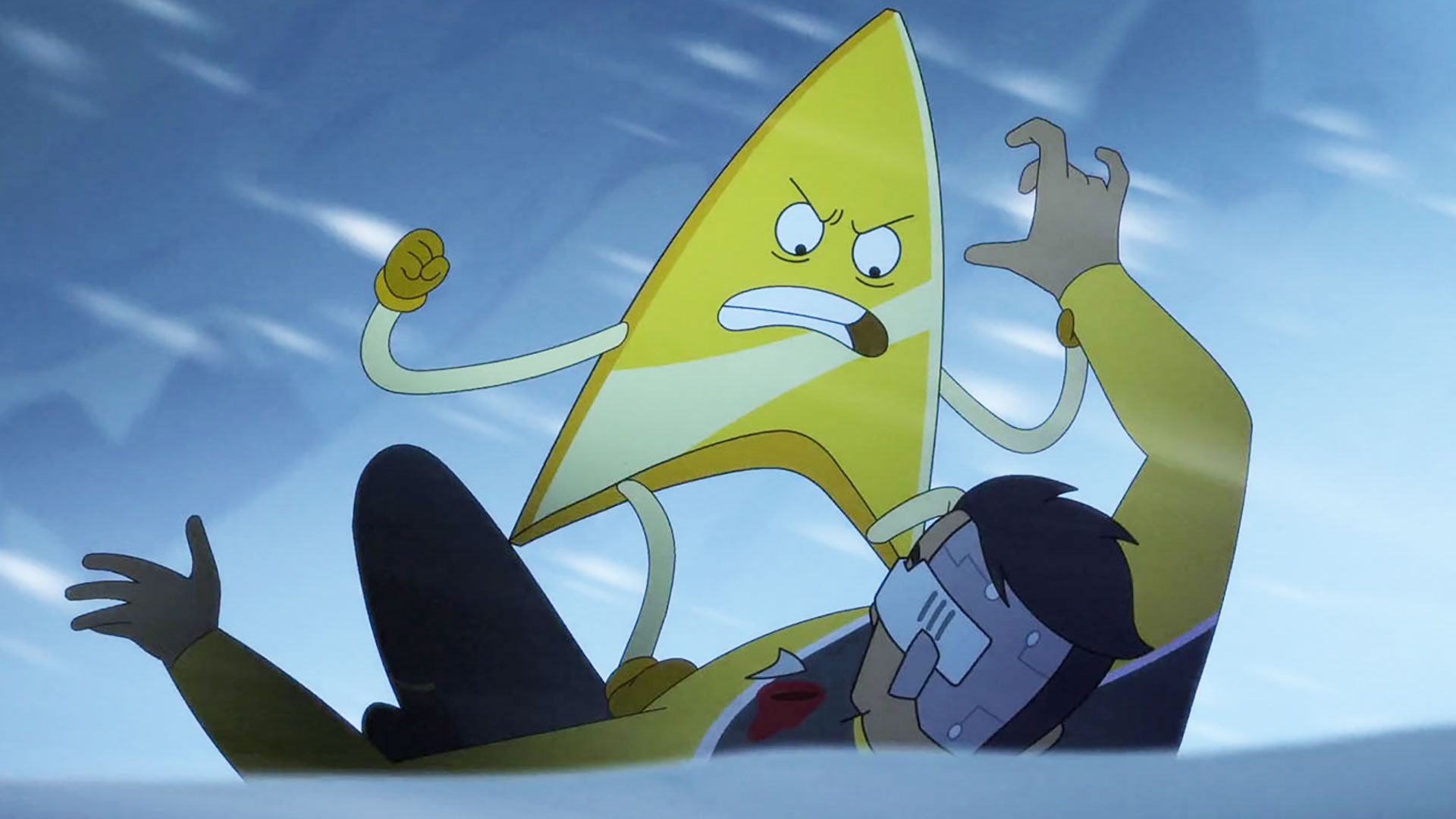 After letting their Twitter followers choose their next episode topic, Katie and Kyle find themselves having to select their favourite action scenes of Star Trek: Lower Decks season one. Also, updates on a Patreon page, and Blast Shield! merch. 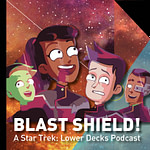 Kyle West is surprised that they haven’t released any episodes, since Christmas 2020. He explains that it is due to the work they have been doing on their other podcast, Her First Trek – A Star Trek Review Podcast.

They have rewatched the entire first season, specifically for this episode.

This episode came about as a result of a Twitter poll.

Followers chose “Best Action Scenes” as the topic they wanted covered next, so this is it, Kyle tells us.

Kyle reveals that listeners can now get early access to Blast Shield! episodes by signing up to the Nerd Since ’86 Patreon.

A subscription to the Nerd Since ’86 Patreon page also gives 7-day early access to episodes of Her First Trek, and more.

Kyle already owns one of the t-shirts, but admits that he isn’t currently wearing it. It’s in the wash, allegedly.

The merch can be found by visiting NerdSince86.com, and then clicking “shop”.

It’s Been a Long Road…

…getting from the last episode, to this one.

That last episode, a random show where Kyle and Katie mostly just wished listeners a Merry Christmas, is currently their most downloaded episode ever. This makes Kyle sad, as he doesn’t think it’s the best representation of the show.

Lower Decks is even better, the second time around. So says Katie, anyway.

This leads to a rendition of a song from Dr. Horrible’s Sing-along Blog, performed by Kyle.

Katie thinks she’s enjoyed the second viewing of the show so much, because she’s now seen other Star Trek, so understands the references in Lower Decks.

Coming Soon to DVD and Blu-Ray

Both Katie and Kyle have created a list each, containing their Top 3 action scenes from the first season of Star Trek: Lower Decks. They have not told each other their picks, yet.

Kyle has an Honourable Mentions list, which he plans to pull from, if Katie has chosen some of the same picks as him.

Once they have both revealed their Top 3 list, Kyle wants them to agree upon a winning action scene.

Kyle has never done a “list episode”, despite all the podcasts he has recorded over the years.

Katie goes first, and calls the climactic fight scene of “Cupid’s Errant Arrow”, which sees Barb versus Mariner in a brutal battle, one of her favourites.

Typically, this is one of Kyle’s, too! Off to a good start…

“That was awesome. A lot of girl power there.” Says Katie.

They both appreciated how violent the fight was, as well as the trash-talking that took place.

Barb winning the fight was a surprise to both of them.

Kyle wonders if it should now be called Ransom Fu.

The comedy aspects of this sequence made it so memorable, as did the surprise that Ransom was great in a fight.

Katie’s final choice steals another from Kyle’s list. She goes for the first battle between Badgey and Rutherford, from “Terminal Provocations”.

Kyle calls it Badgey Vs. Rutherford I.

They both love the brutality of Rutherford snapping Badgey’s neck, to end the fight.

The gruesome and surprising gore of Badgey pulling limbs from a holographic bajoran man also went down well with them both.

The Battle with the Pakleds

Kyle only has one action scene on his list that isn’t on Katie’s.

He admits that he has cheated and, instead of one sequence, he has instead chosen almost the entire season finale, which saw the battle with the pakleds.

Despite agreeing that the scenes in the season finale were great, Katie agrees that Kyle has cheated with his choice.

She disqualifies it, so it cannot be included in the final vote for best action scene of the first season.

It has come down to a decision between Barb versus Mariner, and Badgey versus Rutherford.

Katie suggests that they determine a winner by using hand actions. If they both reveal the same hand action, that means the action scene assigned to that hand action wins.

Kyle has no idea how the game makes sense, but decides to go with it.

They both choose Badgey versus Rutherford, from “Terminal Provocations”!

It is the official winner of Best Action Scene of Star Trek: Lower Decks Season 1.

Kyle reveals his Honourable Mentions list. Listen to the episode, to find out the many scenes he picks out!

Katie is a big fan of Boimler and Mariner doing battle with the big spider creature, in “Second Contact”.

The artwork for this podcast episode was completed before recording, Kyle tells Katie. Typically, he’d already chosen the image of Badgey fighting Rutherford, thinking it wouldn’t win the contest.

Now, he thinks it may just be a huge spoiler for this episode, but can’t be bothered to change it!