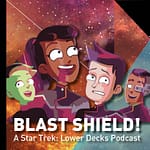 What is in Episode 13, “I’m Georgiou’s Favourite Dish”?

Kyle introduced listeners to the show and wished everyone a Merry Christmas.

He and Katie Harben joked that Kyle’s attempts to use mistletoe, to receive a kiss from her, will likely fail miserably.

They discussed the results of the poll Kyle ran on Twitter, which allowed followers to vote on what the next episode of Blast Shield should be about.

The conversation went on a tangent, as Kyle revealed that he has been pricing up the Blu-ray set of the 1960’s Batman television series.

Since he recently added The Flash, Wonder Woman, and Lois & Clark: The New Adventures of Superman to his collection, he feels there is a 60’s Batman void that needs to be filled.

Katie said that not every void needs to be filled.

Kyle agreed but told her that when he sees a hole, he has to fill it.

She told him to stop.

No Action Scenes This Time

Kyle told listeners that the discussion about his and Katie’s favourite action scenes would be their first episode of 2021.

For this short special, they just wanted to wish all listeners a Merry Christmas, and have a quick discussion about the big announcement made on 17th December 2020, regarding international distribution of Star Trek: Lower Decks.

When discussing the news that Amazon Prime will debut Star Trek: Lower Decks in the U.K., the rest of Europe, and more, Katie offhand referred to it as the Amazon Prime Universe.

They joked about their own Mirror Universe counterparts. Kyle suggested that Katie could sleep her way to the top, but that he may not have the same opportunity himself.

She thought she was far more likely to end up like a Kelpian. “You’d just be bathing people, and combing their hair”, joked Kyle.

He reminded concerned British fans that Brexit does not affect the U.K.’s position as part of the European continent. He and Katie were shocked that anyone online had even expressed that concern.

Why the Hold Up for Lower Decks?

Kyle called out the YouTube haters of current Star Trek productions, and their lies regarding the reason why Lower Decks did not have an international distribution deal at the time it aired in the US.

He listed the facts that explain why Lower Decks was held up, mostly related to the point that CBS All Access swapped its release with Star Trek: Discovery, rushing the process.

Were quarterly budgets also a reason for the delay? Kyle theorised that Amazon Prime might not have been able to speed up the launch for budgetary reasons.

Kyle worried that, as with Star Trek: Picard, the eventual Blu-ray release of Lower Decks would be delayed until 2022 due to Amazon potentially holding exclusive 1-year rights to the show.

How to get Amazon Prime

They discussed the various ways to gain access to Amazon Prime, including purchasing it through the app or subscribing directly via the Amazon website.

With all episodes dropping at once, Kyle suggested that new subscribers could use a free trial to watch the whole show at no monetary cost.

He hoped that people would avoid that route, though, as he wants Amazon to see that there is money to be made in supporting the Star Trek franchise.

The worldwide disgust for Amazon’s success during the COVID-19 pandemic was discussed.

Both were grateful for Amazon, and how they were able to still make necessary purchases all year, despite being in lockdown quite regularly.

A Lot Less Trek Next Year?

Kyle suggested that international fans should make the most of Lower Decks, as it’s likely 2021 will not see much Star Trek released, due to COVID-19 production delays.

Kyle announced that Her First Trek: A Star Trek Reviews Podcast, will launch on 1st January 2021.

The show, hosted by Holosuite Media, will see Katie watch and discuss TOS, TNG, DS9, and VOY, having never seen them before.

Kyle revealed that the first episode of Her First Trek would detail the Patreon that he is launching for his new entertainment website, which will also incorporate Her First Trek rewards, such as Early Access to episodes, and an After Show.

He asked all listeners to subscribe to Her First Trek on their podcast app of choice. Blast Shield will continue to release episodes on its usual feed.

See You Next Year!

They wished all listeners a happy, and safe, Christmas and New Year.