In the ninth episode of THE EXPANSE – A STAR TREK: ENTERPRISE PODCAST, Kris Hill and Kyle West provide their first episode audio commentary track, for Star Trek: Enterprise – Precious Cargo. With the audio of the actual episode also provided, you can either simply sit back and listen to Kris and Kyle’s thoughts as they watch the second season episode, or you can hit play on your own copy of Precious Cargo, and combine the visuals of the episode, with Kris and Kyle’s commentary track.

Kris Hill invites Brandi Jackola over for a trip into the fifth season for Star Trek: Enterprise. They flesh out a midseason episode that is a follow up to the third season episode North Star and introduce a character with ancestral ties to a character from The Original Series.

7. By the Book – Book Review
The Expanse - An Enterprise Podcast

In their first-ever book club edition of The Expanse, Kris Hill and Kyle West take a close look at 2002’s “By the Book,” the first original novel to be released for Star Trek: Enterprise, written by Dean Wesley Smith and Kristine Kathryn Rusch. Get ready for a detailed plot discussion, a look at the character behaviour throughout the novel, thoughts on the writing style, and much more.

6. The Music of Enterprise
The Expanse - An Enterprise Podcast

The elephant in the room is finally discussed, as Kris Hill and Kyle West tackle “Faith of the Heart,” and the rest of the music that was used across the four seasons of Star Trek: Enterprise. Not to leave any other show or film out of the discussion, they also discuss the rest of Star Trek’s significant music and soundtracks. 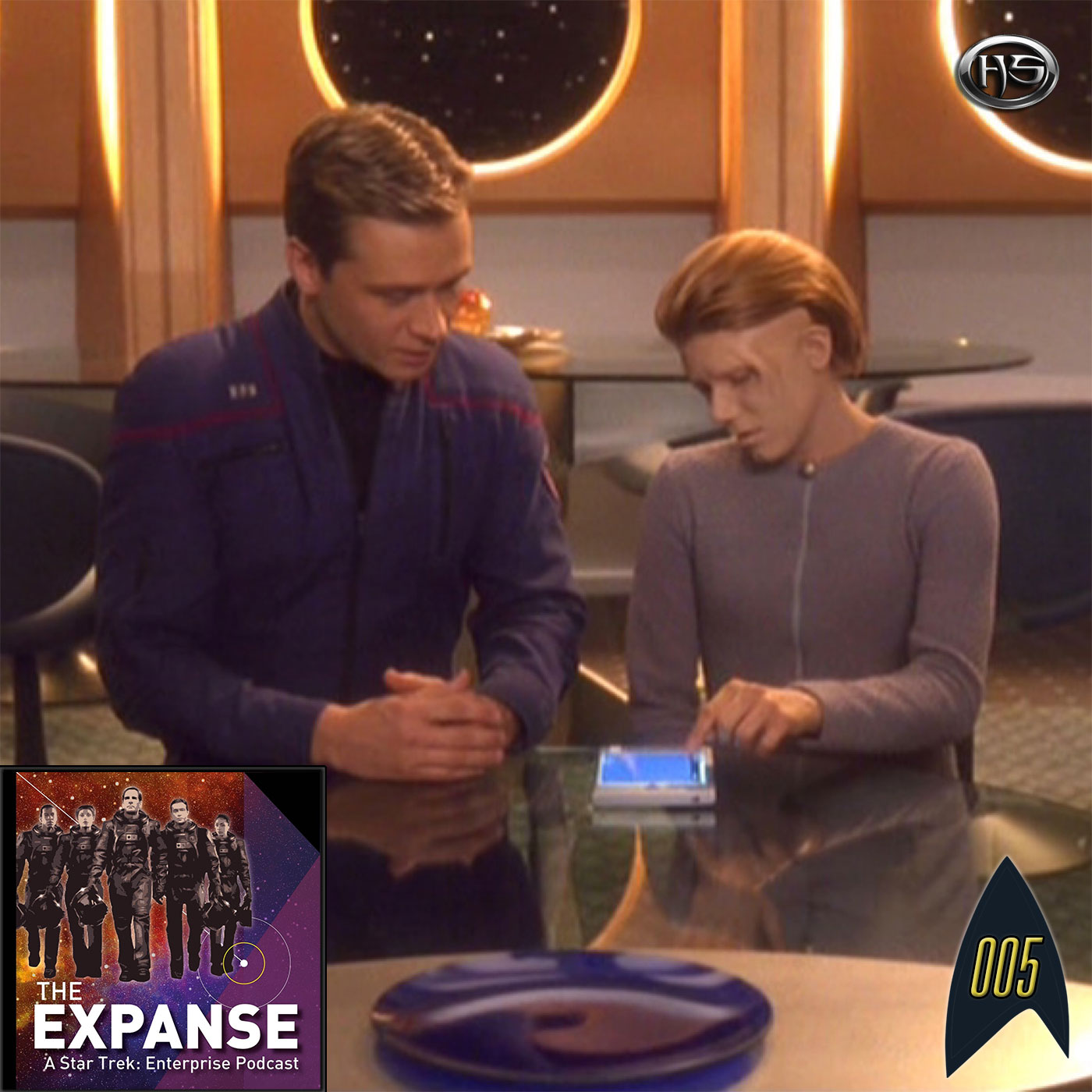 5. Gender, Equality and the Cogenitor
The Expanse - An Enterprise Podcast

In this episode, Kris Hill and Kyle West discuss Trip’s actions in the Star Trek: Enterprise episode Cogenitor. Was he right to interfere, or was he showing complete ignorance throughout the whole episode? Perhaps more importantly, did the writing of the episode have its own issues, with how it discussed the Cogenitor’s gender? Following that, they discuss the much wider issues of gender and equality in today’s world, and whether the future depicted by Star Trek is even attainable.

4. These Are The Voyages – Full Review
The Expanse - An Enterprise Podcast

In this episode, Kris Hill and Kyle West are joined by hugely popular podcaster, and Star Trek: The Next Generation super fan, Amy Nelson. Join them in the 22nd century (or is that the 24th century?!), as they break apart the last-ever episode of Star Trek: Enterprise. 15 years after it first aired, These Are The Voyages is still a hugely controversial episode. Our podcast crew discuss the reasons why that might be the case, and whether it is justified, as they engage in an in-depth discussion about what would be the last Star Trek television episode to air for 12 years, following its release.

In the third episode of this brand new podcast series, Kris Hill and Kyle West take a deep dive into the premiere episode of Star Trek: Enterprise: Broken Bow, Parts 1 and 2. They discuss character introductions, the deliberate differences between this show and the ones that came before it, storyline, and much more. Also, does this episode have racist undertones that wouldn’t make it into the episode, if it were made now?

2: Before Kirk
The Expanse - An Enterprise Podcast

Kris Hill and Kyle West discuss the hype that preceded the debut of Star Trek: Enterprise, including discussion about why Rick Berman and Brannon Braga may have wanted to take the franchise back in time, the casting of Scott Bakula, Star Trek’s viewership numbers for before Enterprise launched, the choice of the marketing campaign by the television network, and much more.

1. Reporting for Duty
The Expanse - An Enterprise Podcast

In the first episode of The Expanse, Kyle West and Kris Hill introduce themselves and talk in-depth about how they first encountered Star Trek, their relationship with the franchise throughout their lives, and where that relationship is at today, in 2020. Social Media: @nx01podcast (Twitter / Instagram / Facebook) Theme music: Heroics, by Boil The Ocean, via epidemicsound.com. Red Red Shoes, by Car Donic, via epidemicsound.com STAR TREK, and all related marks, logos and characters are owned by CBS Studios Inc. The Expanse, Holosuite Media, the website, the promotion thereof and/or any exhibition of material created by The Expanse, Holosuite Media, or The Expanse team are not endorsed or sponsored by or affiliated with CBS/Paramount Pictures or the STAR TREK franchise. This podcast is a fan production. All views made are that of the individual(s), and may not represent that of The Expanse, or the Holosuite Media network.