In this episode, Janine Engelbrecht chats about non-biological motherhood, and witches, in fantasy film. She focuses on Mary Poppins and Maleficent, as Great Mothers, and how feminism grapples with motherhood. 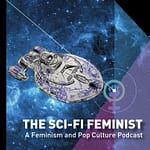 The Sci-Fi Feminist - A Feminism and Pop Culture Podcast
29. Maleficent, the Great Mother

Janine kicks off by looking at some theories regarding motherhood and feminism. She traces it back to first wave and second wave feminism. Within these, Janine specifically focuses on early liberal feminism, radical feminism, and cultural feminism.

Next, Janine explores some myths regarding biological and non-biological motherhood as a foundation for the following discussion.

Janine introduces witches and how motherhood manifests in them. She looks at a few evil stepmothers that are rife in earlier Disney films.

Janine explains how biological good mothers are always contrasted with evil stepmothers in many films. Here Janine uses the movie, Snow White: A Tale of Terror to explain her argument.

Janine briefly gives a history of witches in film to provide context for the discussion. She lists a few good and bad witches and gives her opinion on The Witches of Eastwick. Janine also highlights what generally makes evil witches potentially feminist icons.

Next, Janine chats about Mary Poppins, who is a good witch and a non-biological mother. Janine first gives some background on Mary Poppins.

She then goes on to explain in what ways Mary Poppins is a feminist character. Here Janine highlights the Great Mother archetype and how Mary Poppins embodies it.

Janine then moves on to explain the changes made to the reboot of Maleficent in 2014. She then explains how the new Maleficent shows a positive representation of witches and non-biological motherhood.

Janine summarises what makes Maleficent a Great Mother and a feminist character. She then wraps up by reminding listeners to follow her on social media and bidding everyone a good week ahead.

The Sci-Fi Feminist - A Feminism and Pop Culture Podcast
29. Maleficent, the Great Mother