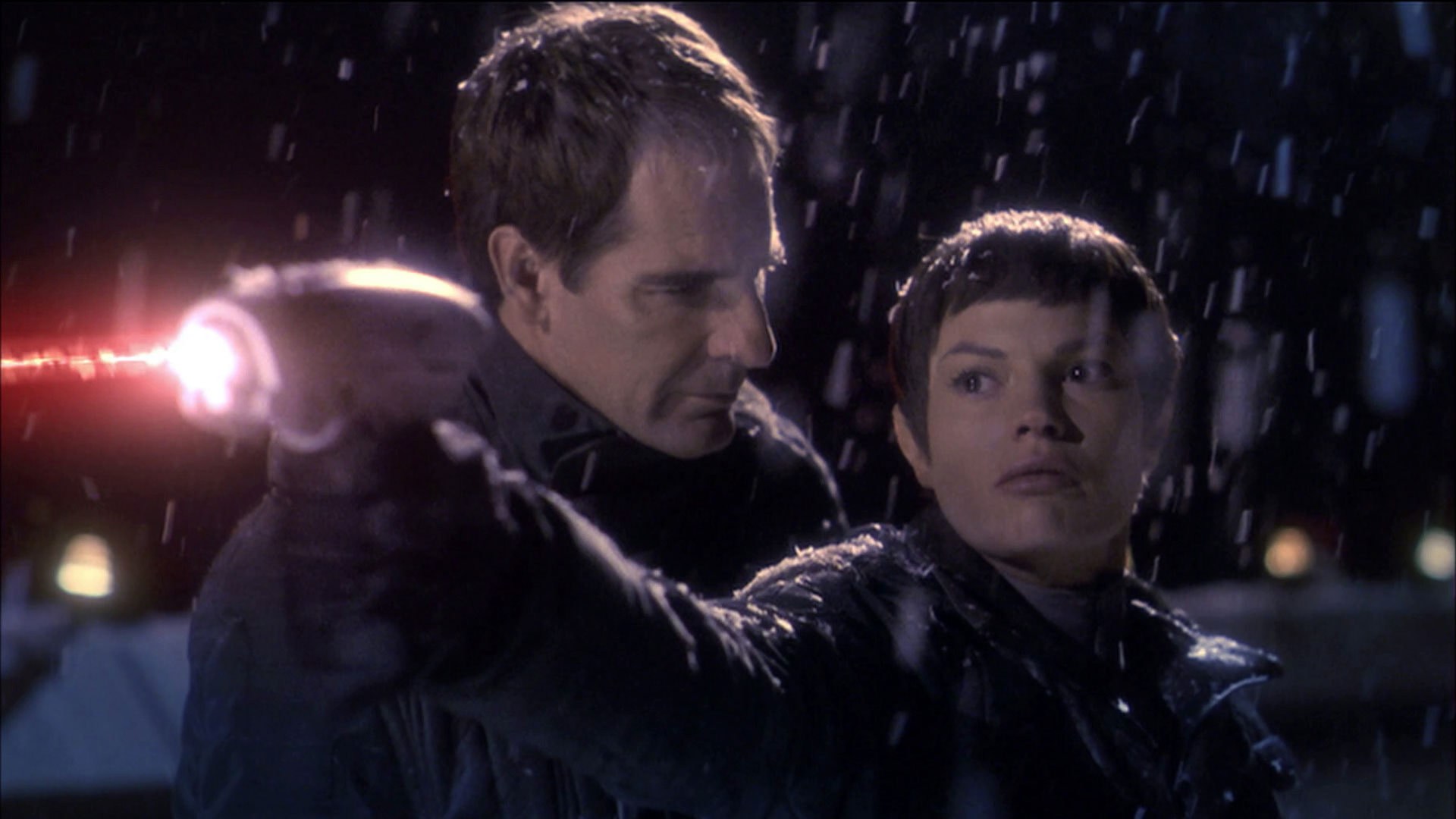 Kris Hill and Kyle West discuss whether T’Pol’s previous career, revealed in Star Trek: Enterprise’s The Seventh, fits with what we know of her character. Was Menos a sympathetic villain? And, isn’t it illogical for a Vulcan to remove painful memories?

The Expanse - An Enterprise Podcast
34. The Seventh - Full Review

The Future of Star Trek

Kyle West is excited for the future of Star Trek, now that Paramount+ has launched.

The heavy focus on Star Trek, in the Paramount+ marketing, makes him feel safe as a Star Trek fan.

A Massive Thank You

Kyle gives what he describes as “a massive thank you” to existing Patreon supporters.

Kyle runs through the plot for the Star Trek: Enterprise season one episode, The Seventh.

Kris Hill lists his favourite moments from The Seventh.

His first is the scene where Trip Tucker has invited Malcolm Reed and Doctor Phlox to the Captains’ Mess for a meal.

His second favourite scene is when Menos has been captured, and is telling Captain Archer, T’Pol, and Travis Mayweather, the story of his innocence.

His third favourite moment (Kyle only asked for three!) was when Archer gave backchat to Menos in the episode’s climax, when Menos was trying to lock Archer and Mayweather away.

Kris can’t decide between his first and third moments, for his absolute favourite. Kyle suggests they flip a coin.

Tails wins, meaning they choose the climax, including Archer’s backchat, as their favourite moment of the episode.

It Does Seem Odd

They are both in agreement that the sudden reveal of a security background for T’Pol, prior to the start of her science career, was a bit jarring.

Kris says that it does seem odd that they would wait so long, to add this layer to her background. He likes it, though.

Kyle questions whether it fits with what was previously established about T’Pol. He thinks it was slightly out of character for her, given she has not been keen to use aggressive tactics, or violence, previously.

Kyle wonders if The Seventh would have been better as a season one episode, given it plays on T’Pol and Archer’s trust and distrust of each other. He also thinks it may have made it seem like less of a shocking reveal about her past.

They Never Go Back To It

Kris wishes that the show had explored this part of T’Pol’s history more. “They never go back to it!” He says.

Although he can’t be sure, as “there are three sides to every story”, Kris feels that T’Pol did not commit murder.

He thinks she was absolutely sure that the seventh person was reaching for a weapon, before T’Pol shot him.

That said, he doesn’t know if T’Pol thinking that, makes it true.

Kyle believes that the man was reaching for a weapon, and that T’Pol was within her rights to defend herself.

He wonders why T’Pol didn’t stun her target, rather than kill him. This begins a conversation about whether or not the Vulcans even possessed weapons that could simply stun an enemy.

Why Did T’Pol Ask Archer For Help?

They are in agreement that T’Pol asked Archer for help with the mission, due to the overwhelming confusion she was experiencing from her flashbacks of killing the seventh person.

Once Archer was confirmed to be going on the mission, Kyle isn’t sure why Travis still went. Archer could’ve piloted the shuttlepod.

He thinks it should have been T’Pol, Archer, and Reed, who went on the mission.

Both are surprised that Archer returned to showing a lot of prejudice against T’Pol, when he wasn’t aware of what her secret mission was.

Kyle is disappointed that Archer reverted to that, given he’d seemingly moved on from those ill-feelings he had toward the Vulcan species.

They both love Bruce Davison in his role as Menos. Kyle feels he brought a level of genuinity to the character that made him feel alive.

They both are disappointed that Menos became a “cardboard cutout villain at the end,” after being so “grey” in the rest of the episode.

Kyle suggests that this was done to help the show justify T’Pol’s later actions, in shooting him and returning him to the Vulcans.

Kris wouldn’t be surprised if, following his capture, Menos was taken to P’Jem and had all of his memories erased.

Kyle’s one annoyance with the episode is how T’Pol is suddenly able to walk along an inch of acid to get to Menos’ ship, when the acid was previously used as their reason for having to stay put on the planet with Menos.

Her makeshift pads for her boots, which would have made little difference, frustrated Kyle.

Kris agrees, but still tries to headcanon an explanation. An explanation that Kyle says he will forever refuse to accept, in fact!

Given it was a serious episode, Kyle thinks the comedy of the b-plot was perfect.

Kris calls this one of Enterprise’s best episodes, but agrees it would’ve been better placed in Season 1.

Kyle feels that The Seventh is a key episode in shifting T’Pol and Archer’s relationship away from one of romantic interest, to one of friends and colleagues.

The Expanse - An Enterprise Podcast
34. The Seventh - Full Review