Star Trek & science articles in these exciting Starlogs from 1979, including all the news from Star Trek: The Motion Picture, illustrator Mike Minor, pinball, & more! 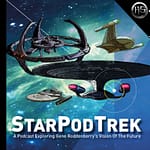 
What to expect from episode 13: Star Trek in Starlog Magazine Issues 25 and 26?

Bob Turner & Kelly Casto are back to discuss the Trek Report, including the latest news about the widescreen Star Trek: The Motion Picture. What was it like to anticipate the new movie in 1979, ten years after The Original Series was canceled? Tune in to find out. Stay tuned for their new podcast coming soon!

No one will disagree that the refitted Enterprise from Star Trek: The Motion Picture is a thing of beauty. Fan film maker Joe Cepeda reflects on the illustrations of Mike Minor and his contributions to Star Trek. Check out the Nature’s Hunger series online to see what Joe has been up to! Joe has a Star Trek set in his own home, where he makes the most bodacious of fan films!

Long-time fan Bob Vosseller considers the Susan Sackett-penned Trek Report. Sackett’s Starlog column on the then-upcoming Star Trek: The Motion Picture was always chock full of the most interesting news. Will the new Star Trek film live up to fans’ expectations after being changed from a television series to a major motion picture?

Remember the Star Trek Mego dolls in the ’70s? The Mego corporation is back and currently produces all new 8″ and 14″ Star Trek figures!

Starbase Indy is the fan-run Star Trek and Science convention held each year on Thanksgiving weekend. Its mission: to celebrate Star Trek’s vision of the future by promoting humanitarianism and STEM education. John Schuck will be the special guest this year. Join us there!