If you grew up in the ’60s, ’70s, or ’80s, you will love StarPodLog! On this spectacular episode: Battlestar Galactica, Wonder Woman, Incredible Hulk, & more! 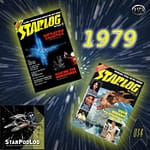 
What to expect from episode 14: SciFi in Starlog Magazine Issues 27 and 28?

This episode has a plethora of content regarding Battlestar Galactica: the 1979 TV series, toys, Marvel comic books, novels, and memorabilia including sleeping bags! Riding the wave of Star Wars fandom, it cultivated its own loyal followers. Can you believe this science fiction show from 1978 was so popular? Why did it only last one season? Later to have 2 spinoffs, Galactica 1980 and a reboot series, this show was an instant classic that so many fans still love today! With Richard Hatch, Dirk Benedict, and Lorne Greene leading the crew in its desperate search for earth while battling Cylons, it was a show with heart and style.

Author of the book “The Best Saturdays of Our Lives”, Mark McCray, fills us in on cartoons with Filmation’s “Adventures in Outer Space”. Filmation studios made some of the best cartoons in the ‘70s, making us the happiest generation of kids ever! The old-style look brings back some serious nostalgia. Mark McCray has a long history with TV cartoons, including working on the ever popular Adult Swim programming. He also hosts “The Best Saturdays of Our Lives” podcast.

Battle of Galactica at Universal Studios

Do you remember the Battlestar Galactica attraction at Universal Studios Hollywood? They were giving Disneyland a run for their money! Special guest Shocker Jon reminisces about the Battle of Galactica. The theme park ran from 1979 to 1992. The two minute, forty-five second ride was the most fun you could have in outer space! Shocker Jon is the host of Shocking Things podcast.