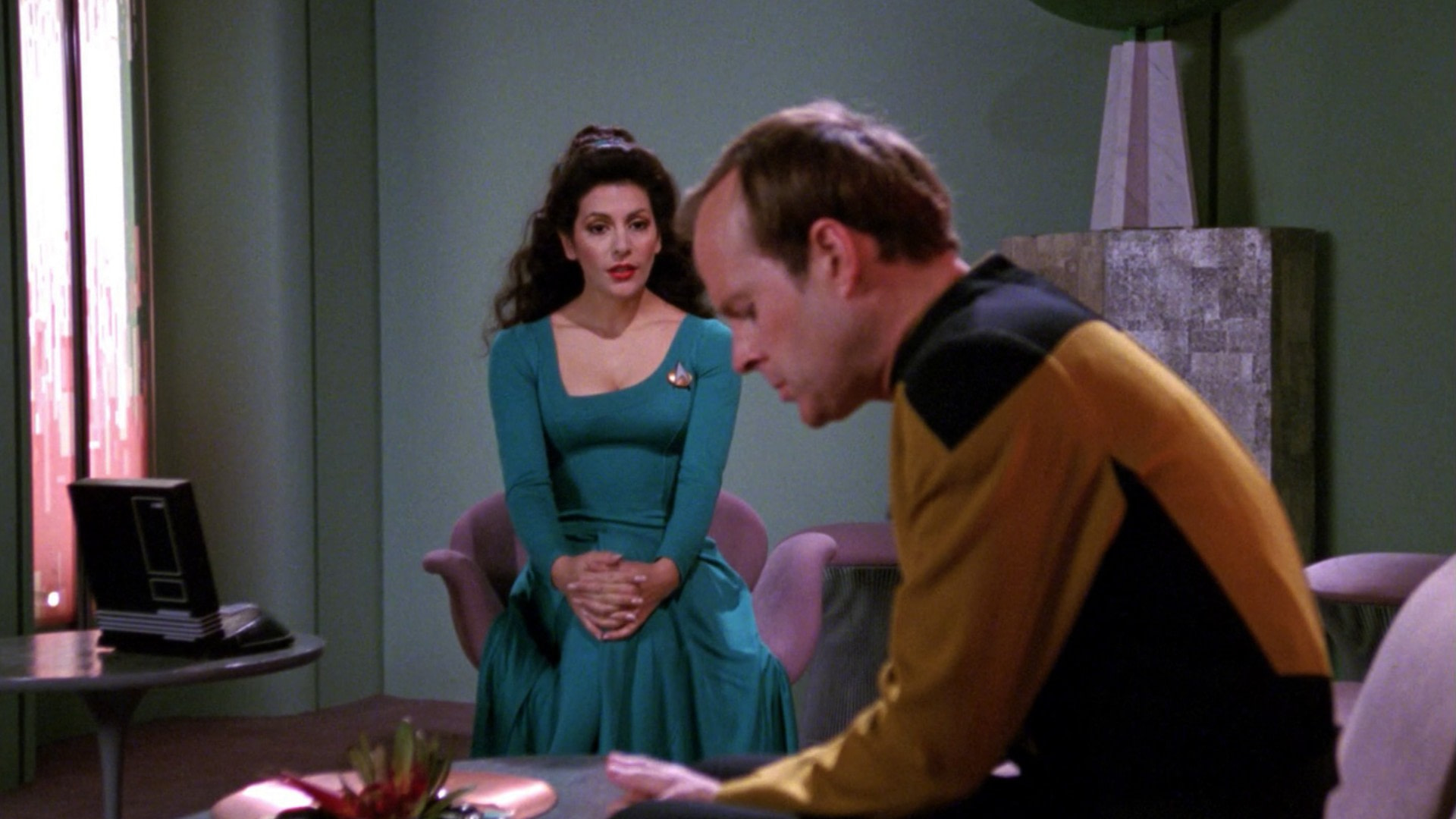 3. The Counsellor Is In

In this episode, Baz Greenland is joined by Star Trek fan, therapist and wife Gemma Greenland to discuss mental health in Star Trek, focusing on the depictions of social anxiety, loss, grief and trauma in specific The Next Generation episodes.

Beyond Farpoint
3. The Counsellor Is In

What’s in Episode 3, “The Counsellor Is In”?

Baz Greenland starts the show, introducing his wife Gemma, who is both a Star Trek fan and counsellor, hypnotherapist and play therapist.

They are looking forward to discussing the depiction of mental health in Star Trek, particularly Star Trek: The Next Generation – something close to Gem’s heart. There is also a brief diversion into Baz’s Star Trek geekiness compared to Gem’s, including a debate of whether to get a Micro Machines Enterprise D on their mantlepiece!

Baz asks Gem what her favourite Star Trek series is – for Gem it is Star Trek: The Next Generation, and goes on to explain why it has the perfect level of trekking!

Gem’s favourite Star Trek character is Data and her favourite episode is Frame of Mind from TNG season 6.

Gem explains that they’ll be looking at every day mental health such as anxiety, loss, grief and trauma compared to severe psychiatric cases.

They discuss how characters have the capacity to suffer from Post Traumatic Stress Syndrome. Gem suggests every ship should have a counsellor, trauma therapist and trauma specialist treatments. They talk with good examples of exploring trauma through Detmer in Star Trek: Discovery season 3, compared to bad examples like Torres’ trauma over the loss of the Maquis on Star Trek: Voyager. They also discuss how counsellors – Deanna Troi and Ezri Dax – were rarely used effectively in the show..

Baz is surprised that Dwight Schultz’s Barclay was only in 5 episodes. Gem notes he really stands out, for obvious reasons. Baz notes that the crew of the Enterprise are always seen to be the best of Starfleet and it’s interesting how the crew react to Barclay who does struggle to the best of everything.

Baz introduces season three episode Hollow Pursuits and notes that the IMDB description describes Barclay as shy and suffering from Holodeck addiction – which Gem notes is wrong! Baz notes it is a misconception because his use of the holodeck is used to demonstrate how he manages his mental health struggles. Gem also argues that he’s not shy – it’s a shallow, insulting term. Barcaly is dealing with social anxiety, self esteem and self worth issues.

Gem gives her observations of Barclay’s introduction, acting out wish fulfilment in the Holodeck and the difference when interacting with the crew, particularly his shame reaction and fear when told off by Riker. Baz notes that there is no room for human frailty, which Gem says makes him fascinating to watch and how he’s the most human character on the show.

Gem gives her opinion on Troi’s counselling session with Barclay, pointing out all the ways in which it doesn’t work, though pointing out the breathing techniques were basically right and Barclay was right to react the way he did.

Baz points out that it is Guinan, not Troi, who is able to point out to the crew that their reactions to Barclay makes it worse. He also notes that Troi, at least, recognises that the Holodeck can be a therapeutic benefit for Barclay, to use it as a coping mechanism.

Baz also refers to his follow-up episode The Nth Degree, and Gem notices how Troi recognises his progress. She also discusses how his increased confidence moves from positive to being framed as negative and delves into how Troi recognises Barclay’s loss of self actualisation.

Childhood Grief and Loss (The Bonding)

Baz recaps the IMDB description of the season three episode. Gem immediately picks up on the idea that the child, Jeremy, has to deal with his mother’s death because that is the Starfleet way. They delve into Wesley’s own reaction to his father’s death and the dangers of having families onboard starships.

Gem is fascinated by Data’s question – does the proximity to a person have an impact on the sense of loss – he is the mechanism by which the show questions things that would otherwise be taken for granted.

They discuss Troi’s role in the episode and how her advice and guidance is useful and real. One of their favourite scenes was where Troi refuted Picard’s belief that Jeremy was good to be brave and that they need to deal with what he is dealing. Baz feels that this is a spotlight on what her day job must be like and it’s great to see her support Jeremy and educate the crew – and the audience – about how to deal with death. Gem feels the use of her being an empath is a missed opportunity. They always have her as an empath or a counsellor – but never both.

Baz recaps the IMDB description of the season three episode. Gem feels it is a good representation of some of the journey Timothy needs to go to, in order to grieve. She discusses how Troi recognises the process Timothy needs to take and Data’s questions once again to understand trauma and loss.

They discuss the connection with Data, who rescued Timothy from the ship, who becomes a saviour figure. Gem is also fascinated by Data’s almost empathic response to Timothy’s loss. They both discuss Timothy’s coping mechanism to delay his feelings of loss by becoming more like Data, while Data almost becomes more human in his relationship with Timothy.

Despite Baz mixing up the kids from The Bonding and Hero Worship, they go back to Troi’s role in helping Data to understand that Timothy is blaming himself for his parent’s death and how that pain, guilt and confusion manifests. Gem liked the way he worked through his process and how he could put down the android persona and start to grieve.

Baz recaps the IMDB synopsis and the trauma of what happened to Picard in The Best of Both Worlds. They were both frustrated that we only got the end of Troi’s counselling sessions with Picard. Gem does like her use of classic counselling techniques. She also picks up on Picard’s denial about being better and Troi’s observation about his BS!

They diverge to discuss what they want from a Troi counselling series, based on the series In Treatment’ ‘Sessions with Troi.’

Baz recaps the plot as Picard returns home to France and how he finds his old normality after becoming Locutus. Gem recognises that to do this, Picard has to go back to the beginning – his childhood. This is an episode that deals with trauma and absolute loss of control – something he had with bullish older brother Robert. Gem notes that being the best was the weapon he used to get through life. She also picks up on the relationships with his nephew / inner child and sister in law / mother!

They discuss the scene where Picard breaks down and fights with his brother in the mud and how it was so well done. They go into how the character of Robert allows him to become a fallible human being again – and then his identity.

Baz notes this was the first time that Star Trek really took the time to deal with trauma, making it one of the show’s best episodes. He also addresses that that trauma continues, as demonstrated in I, Borg, Star Trek: First Contact and Star Trek: Picard.

Baz ends with asking Gem how successful Star Trek: The Next Generation was in handling mental health issues? Gem feels it did a bit, but Star Trek rarely goes far when it comes to mental illness and there’s room for improvement. Baz notes that both Star Trek: Discovery and Star Trek: Picard have both addressed mental health and trauma and maybe it will be dealt with further.

Gem says there are a lot of ways to get help and there are new ways to get support, even through forms like text messaging and a number of private therapists offer discounts and discounted support to clients.

Links are provided below.

Beyond Farpoint
3. The Counsellor Is In