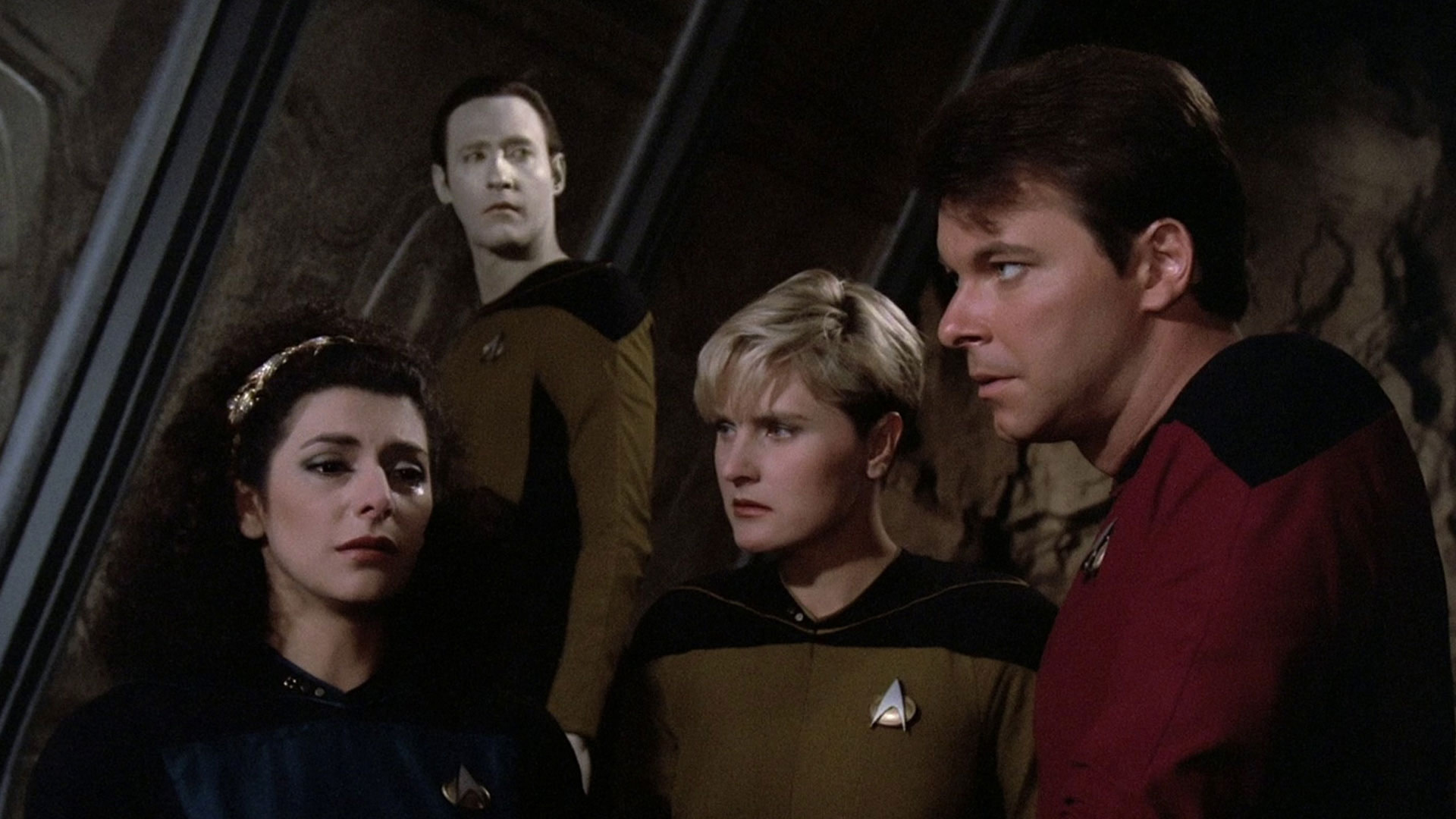 In the first full episode of Beyond Farpoint, Baz Greenland and Geoff Owen discuss their love of Star Trek: The Next Generation, and the pilot episode Encounter at Farpoint, which debuted in 1987 and introduced the recurring entity known as Q.

Beyond Farpoint
1. Pain, Such Pain

Baz Greenland starts the show, introducing himself and Geoff Owen.

Baz recaps the teaser episode and confirms this is the first full episode of a monthly release, looking at Star Trek: The Next Generation.

Baz tells listeners that this episode will look a bit more about their love of the show, before delving into the pilot episode ‘Encounter at Farpoint’

The podcast won’t just be an episode by episode look back, though they may do their own Shades of Grey when they do a clip show of best bits to cover costs!

What Baz and Geoff love about Star Trek: The Next Generation

Geoff agrees – it is more Star Trek Trek than the original Star Trek and has aged well.

What did The Next Generation do better than any other Star Trek series?

Geoff says exploration – the spirit of hopefulness and adventure and how we get into the future by working together.

Baz agrees – The Next Generation is a continuation of the idea that we can be a better humanity. He also talks about the good work with the Klingons and Romulans and that the show did great character work too.

Geoff also talks about Worf’s journey and repercussions of previous episodes that creates an ongoing thread of a story, which was unusual in 80s and 90s TV.

Missed opportunities in The Next Generation

Geoff said there was the lack of exploration of what happened to Picard, outside the nature of the Borg.

Baz said The Next Generation was still very episodic and stories never went beyond two-parters.

Geoff asked what characters he would like to have seen come back. Baz said Sela – she was a great concept and he loved the ramifications of Yesterday’s Enterprise. Sela was a great villain and would have been great to have seen in Nemesis. He would love to see her in Picard.

Geoff always thought the creatures at the end of Conspiracy should have come back. The mystery of the signal at the end was never resolved in any Star Trek series.

Looking back at Encounter at Farpoint

Baz talks about the episode, it’s airdate, writers, director and provides a synopsis.

Baz asks Geoff what he thinks – it completely blew his mind the first time he saw it but the pilot feels a little dated. It is a great launching point for The Next Generation.

Baz feels there is a lot of ambition in the pilot and agrees that the episode, and season one, feels dated, more like 60s Star Trek. Geoff says there was still enough good stuff to keep us watching.

Baz said Q was great and the first half hour was very well paced. Geoff feels Q has that presence that demands your attention. They discuss his various captain uniforms. The drug-controlled soldier reminds them of the Jem’Hadar from Deep Space Nine.

Baz likes that there’s no deal made about Worf as a Klingon, but there’s a very stilted dialogue with Data. Geoff said it feels like Picard is treating him as a child. He also said the first couple of The Next Generation books are very condescending to Data. Baz says no one seems comfortable with him. Geoff wondered if it is the distrust in androids carrying across for the 60s Star Trek series.

Baz asks Geoff’s opinions in Troi in the pilot episode. Geoff says she gets better! It’s odd that she’s telepathic in the pilot, which might have been more interesting, if it had carried on. Baz loved Troi in the Picard episode Nepenthe, but the Troi in the pilot is different to any other version. The cheerleader look, accent, abilities and performance are all really odd. There’s a lot of melodrama.

Baz finds Yar more irritating – there was a lot of potential with Yar, but he finds the character very earnest and forceful. Geoff says she was based on Vasquez from Aliens. Baz says she works better in quieter, softer moments. Geoff asks if Baz would have liked to have seen her continue? Baz agrees – you saw in Yesterday’s Enterprise the Yar we should have got. Geoff liked Yar more than Baz.

Baz said Yar’s departure allowed Wof to develop – and what is with his forehead in the pilot?! Baz loves some Worf moments in the pilot. Baz loved him in The Next Generation and Deep Space Nine and wants him to return in Picard. Baz also mentions that Marina Sirtis was going to be fired, but stayed because of Denise Crosby and Gates McFadden’s departures at the end of season one. Troi also improved once Marina was allowed to bring more warmth to the role.

Geoff’s aks Baz which The Next Generation doctor he prefers. Baz prefers Crusher later on, but wishes Pulaksi had returned somehow as she was a great character. Geoff agrees. The addition of Guinan and Pulaksi improved The Next Generation in season two.

Geoff says Doctor T’Ana from Lower Decks reminds him of Pulaski, if she could swear.

Baz mentions all the weird conflict between characters. There is Riker being horrible to Geordi, Crusher being aloof to Riker and Picard. Picard won’t look at Riker when he arrives on the ship, Yar won’t talk to Riker and then Riker watches a clip show of the first half hour of the episodes.

Geoff mentions Riker being forced to do a manual docking and the weird tension between Riker and the captain.

Baz says everything is very stilted or OTT and so much of the episode needs to be dialed back. Was it the direction? The only decent performance is Patrick Stewart. He can handle the big moments. Geoff talks about how Picard improved and Patrick Stewart warmed up with the cast and crew.

Geoff loves that scene. It was a perfect handing over of the baton. Baz loved it but finds the music very, very cheesy. He loves the dialogue, with Data being the Spock character to play off McCoy. Geoff also mentions he only worked for a standard day rate as an actor.

Baz mentions the introduction of the holodeck. Geoff would want holodeck technology more than any other Star Trek technology. Baz talks the increased budget and scale to the show and Geoff talks telling new stories like Dixon Hill and Sherlock Holmes in Star Trek. Geoff loves holodeck episode. They discuss the dire Voyager holodeck episodes (outside Captain Proton) and they both love Our Man Bashir on Deep Space Nine. They also discuss the seedy side of Quark’s holosuite!

Baz doesn’t understand how Wesley walks off the holodeck dripping wet. Geoff believes it is explained – the rocks and trees and basic replicated patterns, so the water will be real.

The mystery of Farpoint Station

Baz asks Geoff if the central mystery is good enough? Geoff likes the ideas of the station giving people what they want, but doesn’t understand how that relates to the captured creature.

Baz suggests it wasn’t that good and Q’s line was a get out clause in case the audience didn’t think so too.

Baz and Geoff also discuss the odd pacing for the last hour, which isn’t as strong as the first half hour. Baz also jokes about the mystery of the Ferengi Alliance teased in the pilot.

Geoff provides the original concept for the pilot, which was meant to be an hour long. DC Fonatna’s script had to be revised when the studio wanted two hours, resulting in Q’s addition. Geoff provides detail of the Farpoint-centric episode, featuring the USS Starseeker, an orbital weapons platform and a simian-like race that forces the crew into slave labour.

Baz and Geoff discusses how different the episode was and how the Q-centric first half hour of the pilot is the best part, the planned first officer that would die and the impact of DC Fontana on Star Trek

Baz ranks Encounter at Farpoint as 7/10.
Geoff ranks it as 6/10.
They love the Q stuff but the Bandai storyline at Farpoint station drags.

The next episode will look more depth into the character of Q across The Next Generation and the wider Star Trek franchise.

Beyond Farpoint
1. Pain, Such Pain