In this teaser episode, co-hosts Baz Greenland and Geoff Owen introduce themselves to each other, and to their listeners. They discuss what Beyond Farpoint – A Star Trek: The Next Generation Podcast will be, and then test each other’s Trek fandom. 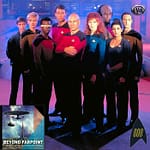 Beyond Farpoint
0. Our Star Trek Shame

Baz Greenland starts the show, introducing himself and Geoff Owen.

Baz says that he and Geoff are huge Star Trek fans.

Geoff is excited to talk about Star Trek: The Next Generation, but says that they will dip into other Star Trek shows and movies when it fits.

Baz tells listeners that this episode is just a teaser and not their official first episode. That will follow at a later time.

He is clear that Beyond Farpoint will not be a rewatch podcast, and whilst it will cover episode reviews, the show will explore any and all things relevant to Star Trek: The Next Generation.

They confirm that the show will release one episode per month when it launches properly.

For the rest of this episode, they intend to ask each other questions, to test the other person’s Star Trek fandom.

Geoff’s first question for Baz, is what is Baz’s favourite season of Star Trek: The Next Generation?

Baz feels that season six contains most of his favourite episodes and that the show was firing on all cylinders.

Geoff’s own favourite season is the fourth.

It’s Baz’s turn to ask a question, so he asks Geoff what episode and movie are his favourites, from TNG.

Geoff names Yesterday’s Enterprise. It blew his mind, the first time he ever watched it. He has met Eric A. Stillwell, the main writer of the episode.

Baz feels the same about Yesterday’s Enterprise but also loves The Best of Both Worlds. He agrees that First Contact is the best of the TNG movies.

How Would You Introduce A Non-Fan To TNG?

Geoff throws a tricky question at Baz. He wants to know which episode Baz would pick to introduce a non-fan to TNG.

Baz thinks he would opt for Data’s Day, because it is character-focused, and shows the things that happen on the ship, day-to-day.

Darmok is the episode Geoff would choose.

For Geoff, it’s Genesis. He is fully aware of its flaws, but when he was young, it scared him and holds a fond place in his heart.

Schisms, and Rascals, are two of Baz’s guilty pleasures. He would have named Parallels, but he thinks it’s too popular with fans, to call it a guilty pleasure.

He also loves the first 35 minutes of Threshold, from Season 2 of Star Trek: Voyager. It had an amazing build-up, but “the pay off wasn’t great”.

Finally, Geoff tells Baz that he enjoyed These Are The Voyages, the controversial final episode of Star Trek: Enterprise. This horrifies Baz.

Geoff’s final question to Baz, concerns which moments and/or episodes from Star Trek that Baz would choose to relive as a holodeck programme.

For TNG specifically, Baz favours being on a Borg ship in Q Who.

From Deep Space Nine, he would choose to take part in one of Julian Bashir’s James Bond-esque programmes.

For a holodeck experience from one of his other interests, Baz thinks he would go for a scene from the likes of The Lord of the Rings. One that is huge in scope.

Answering his own question, Geoff would like to do the Sherlock Holmes programme from TNG, and the Captain Proton one from Voyager.

He is a huge fan of Formula 1, so would have to do something related to that, for his own personal choice.

Baz wants to know what is the one thing that would get Geoff’s Star Trek street cred revoked, were he to admit it.

Geoff says that he likes The Orville, but doesn’t think it would get him kicked out of Star Trek fandom. Baz agrees with him.

As he had just recently rewatched TNG’s Lower Decks, Geoff feels he should be admonished for having previously forgotten the fate of Sito Jax, in that episode.

Baz warns us that his own admission is going to be controversial.

Although he loves all Star Trek, he prefers Babylon 5.

Geoff says that he wants off the podcast right now. They both agree never to discuss Babylon 5 or the Star Trek: Enterprise finale on the show again, so as not to upset the other person.

When the show officially launches, they will cover Encounter At Farpoint, John de Lancie’s Q, the work of Ronald D. Moore in Star Trek, mental health in TNG, and more.

The show will launch in the early summer of 2021.

Beyond Farpoint
0. Our Star Trek Shame