Death Wish. Join Liam and Suzanne as they wade into the deep conversations brought about in this episode. Such as, was that really rabbit and what is going on with John de Lancie’s lips?! Also, watch out for ANTS! 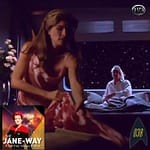 Forced to choose between indefinite incarceration or letting someone commit suicide, can the Captain Jane-Way another way?