Dreadnought. NSFW. Lube up and get ready to get as sweaty as Lt Torres. Join us with guest Char to talk about another time where a sentient piece of machinery is trying to destroy something. Was Janeway Pi-110’ing for someone she’s never met the right way? 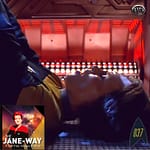 Ah Dreadnought. The second season 2 episode where B’Elanna has to out-smart a sentient piece of machinery in order for it to stop destroying something (see: Prototype: Pleasurebot Dome for the other).

Lt Torres must face a creation that she made when she was in the Maquis – a stolen weapon from Cardassia that was reprogrammed to fight for the Maquis, lovingly named Dreadnought. Unfortunately the caretaker saw it is a giant… toy… in his quest for a mate and whisked it off to the Delta Quadrant where, by the power of infinitesimal Star Trek: Voyager odds, our intrepid crew find it again.

It was a good episode that probably would have been a great episode in Season 6, or just not so close to Prototype. However, it is probably better than Prototype.

Liam and Suzanne welcome Star Trek: Voyager podcasting veteran, Charlynn (Char) Schmiedt, to the show. Char was the co-host of previously popular Star Trek: Voyager podcast, To The Journey, recording 190 episodes with her other co-hosts before Suzanne, and eventually Liam, hosted that show. Obviously Liam and Suzanne host this much better show now!

What happens when we are tipsy? We related everything to lube. So get lubed up and take a listen to how the Borg might start assimilating in the future.

Do you think that blowing up the ship for someone she’s never met is the right way? Is it the wrong way to send your chief engineer to a very deadly missile? Not changing your self destruct password is probably a Jane-way, right? Take a listen and let us know what you think.