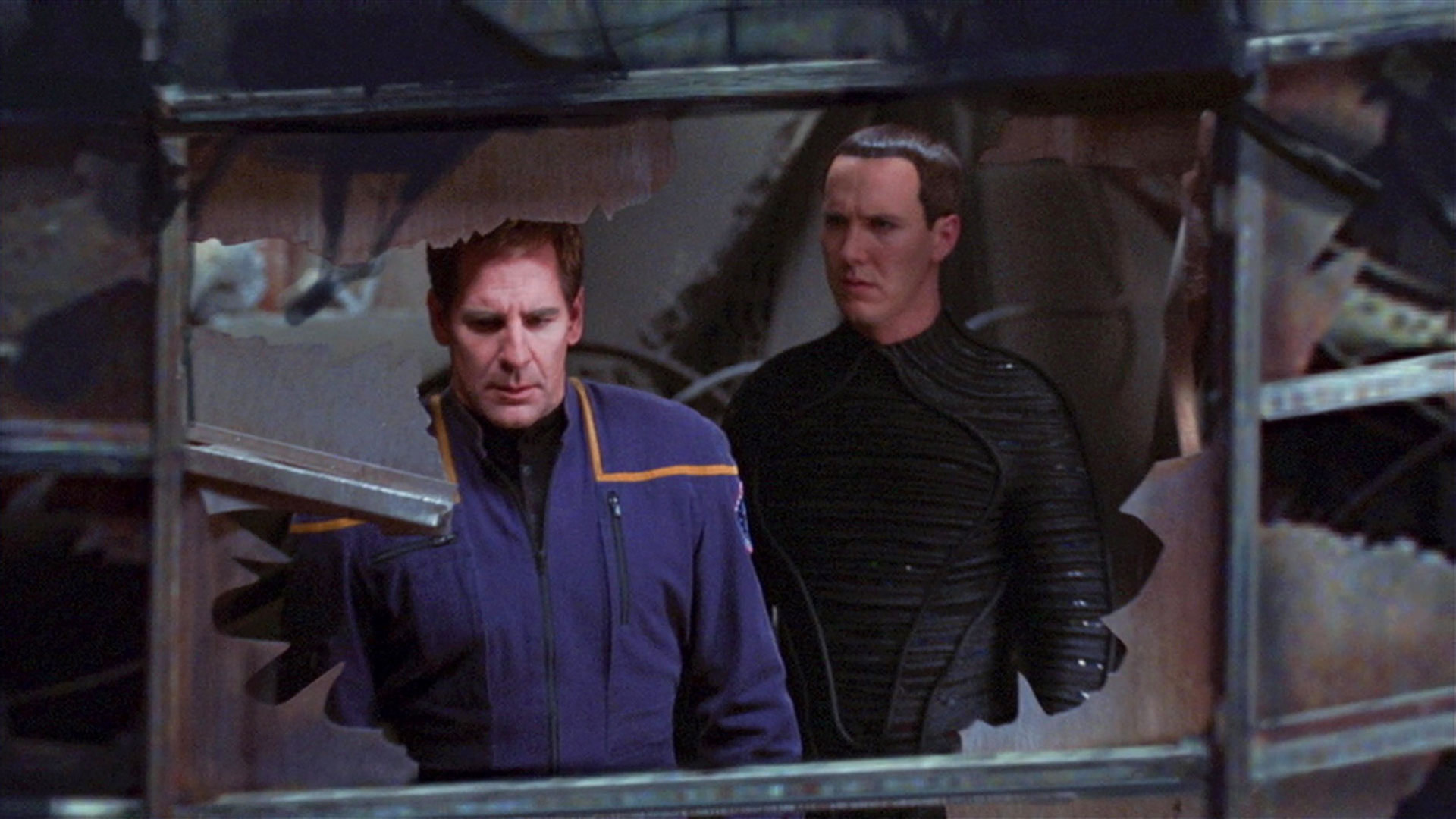 Did Kris and Kyle ever believe the Enterprise crew to be responsible for 3,600 deaths? Was the real culprit a surprise? Did Captain Archer show poor leadership? And, what about that cliffhanger? Full review of Star Trek: Enterprise, “Shockwave, Part One”.

The Expanse - An Enterprise Podcast
30. Shockwave, Part One - Full Review

We would like to thank Scott Gilbert, Stuart McIlwain and Greg Molumby for supporting this podcast, as valued patrons.

Kyle West welcomes everyone to the show, and tells listeners that this episode will be discussing part one of “Shockwave”, the Season 1 episode of Star Trek: Enterprise.

He says that part 2 will be discussed on the next episode of The Expanse – A Star Trek: Enterprise Podcast.

Kris reveals that he stumbled across his old copy of TV Guide, from late February 2005. It contains an article about the upcoming Enterprise finale, “These are the Voyages”.

Kyle asks him to read it out, which he does. The article hypes the Enterprise episode.

Kris believes that he saw the episodes in order, so was blown away when he first watched “Shockwave, Part One”.

Kris admitted that he was stunned by the opening teaser of the episode, and was trying to work out what had happened at the same pace as the characters.

Kyle asks if it crossed Kris’ mind that the destruction of the mining colony could have been related to the Temporal Cold War.

He says he can’t remember for sure, but he definitely would have thought so. He remembers thinking it may be related to the Romulans, too.

Kyle cannot remember his original reaction to the teaser, but admits that he still is shocked by the destruction even now.

He found the destruction of the mining colony to feel real, and says that “they nailed it”. It was sudden, as something like that would be in the real world.

They both agree that it was a no-brainer for the Shockwave to focus on the Temporal Cold War.

Whilst it was only dipped into briefly, in season one, Kyle thinks that the Temporal Cold War was always going to be the driving force of the season finale.

He’s disappointed that they did not find much new information out about the war, though.

Kyle questions Archer’s behaviour, following the destruction. He feels that Archer wanted a specific person he could blame, and that he dealt with it poorly, as a result.

Coming to Archer’s defense, Kris feels that Archer was dealing with the extra pressure of knowing they had ruined the mission that his father had worked so hard on to make happen.

Kyle agrees that this weight was definitely on Archer’s shoulders, but that it was bad leadership to let that impact how he was dealing with his crew.

“He’s the most human,” says Kyle, of Archer and his less-than-perfect reaction to the colony’s destruction.

It hasn’t gone unnoticed, by Kyle, that Crewman Daniels never again returned to the exact time period in which he was killed, in “Cold Front”.

He wonders if whatever happened to Daniels, in “Cold Front”, meant that he was unable to return to the NX-01 Enterprise in it’s own time period.

They agree that Porthos must have also travelled back in time, with Captain Archer.

Both Kris and Kyle were impressed by the mission that saw Archer infiltrate a Suliban base, to get the proof he needed that Enterprise didn’t destroy the mining colony.

Kyle likes that it felt like a spy mission, and showed the crew being highly efficient.

He does wonder how Archer was able to remember all of the exact details he and Crewman Daniels discussed, though.

“Oh shit,” says Kris, of his reaction to discovering Enterprise was surrounded by cloaked Suliban vessels.

Kyle feels that it would have been a more shocking moment, had the episode not previously shown Future Guy instructing Silik to get Archer for him.

800 Years into the Future

Kris admits that, initially, he thought Archer had been transported to the mining colony. When he realised Archer was in the future, he was shocked.

Kyle says that his immediate thought was that Archer had moved into the Enterprise’s own future, and was inside destroyed corridors. He didn’t initially think that Daniels had pulled him to the future.

As he only had season one available to him, Kris had to wait a while to find out the resolution to the cliffhanger ending.

He was wondering “how the hell” Archer could get home.

“You know he’s going to go back,” says Kyle, but that the cliffhanger ending saw Daniels rule out so many routes to get him home, that he had no idea how they’d do it.

Kyle doesn’t mind a big cliffhanger ending, if he’s getting the resolution within 4-6 months. He hates cliffhangers that can take a year or two to give a resolution.

The wait for a conclusion to Shockwave was long, for UK viewers, he says.

He much prefers the popular model currently used by many TV shows, where the season storyline is concluded within the season, but ends with an unrelated cliffhanger that sets up the direction of the next season. He uses Discovery’s season one and two finales, as an example.

Where Does it Rank?

Kris places Shockwave’s cliffhanger as second amongst all Trek season finale cliffhangers, with Discovery’s first season cliffhanger ahead of it.

Kyle isn’t sure where he would rank it, especially as Deep Space Nine gave some great season ending moments.

As a jaw-dropping cliffhanger, he puts Shockwave it up there with the likes of Star Trek: Voyager’s Basics, and Scorpion.

The Expanse - An Enterprise Podcast
30. Shockwave, Part One - Full Review