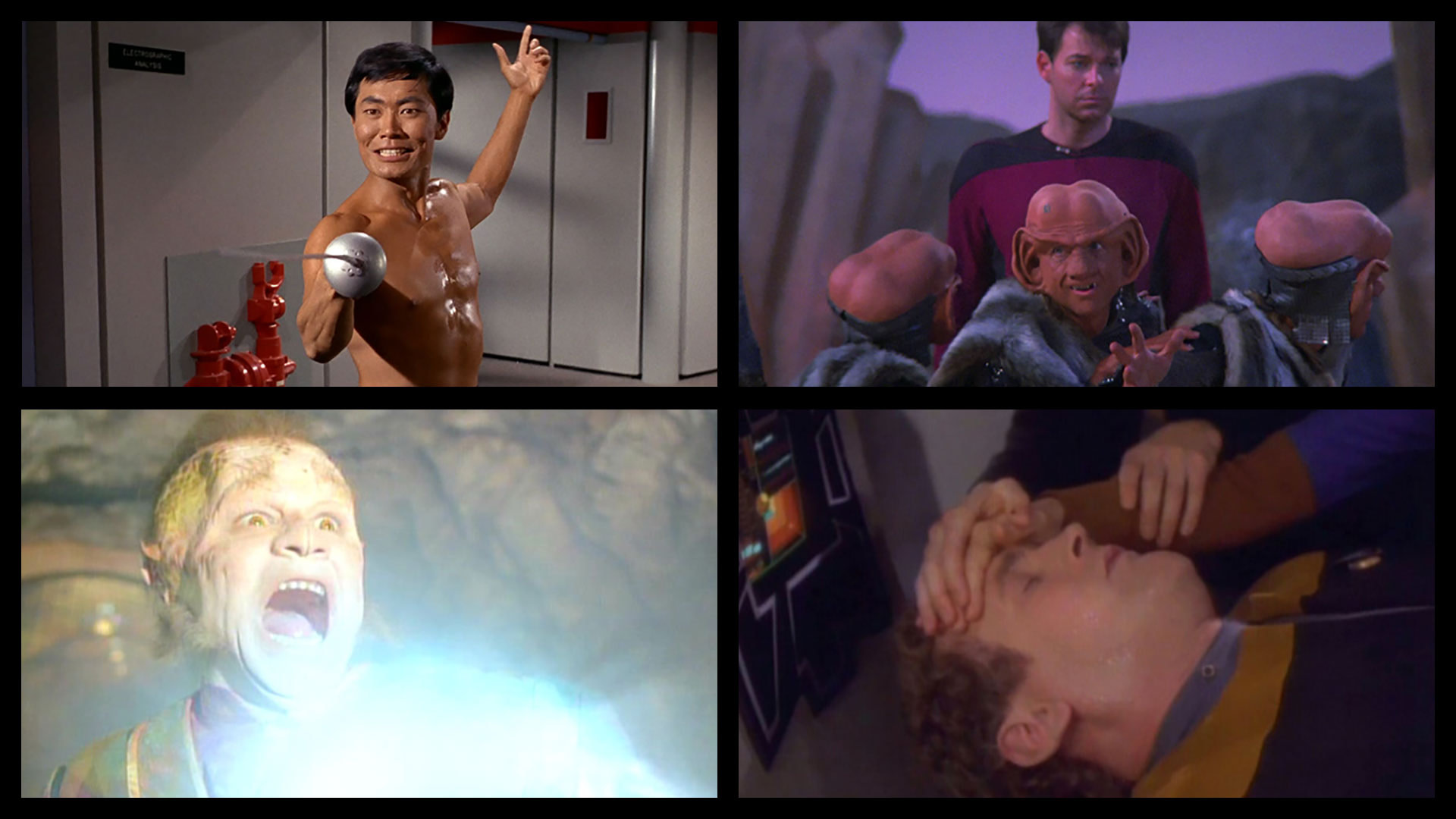 In this episode of HER FIRST TREK, Katie Harben tackles an episode from each of the first four Star Trek television shows. With Kyle West, she talks about her problem with Deep Space Nine’s characters, and much more.

What to expect from episode 4: “Transporter Tetris”?

The episodes covered in this edition of Her First Trek – A Star Trek Review Podcast are (TOS) The Naked Time, (TNG) The Last Outpost, (DS9) Babel, and (VOY) Phage.

After Kyle almost misses his cue to introduce himself, Katie labels him unprofessional.

She jokes that she cannot work with him anymore, and quits.

Kyle says that she lasted longer on the show than he predicted, so he’s fine with her leaving.

After Kyle refers to them as co-hosts, Katie says that Kyle is the host, and she is more “the soux host”. Like a soux chef.

She explains to him that “soux” is French for “under”.

Kyle drops some French on her; “I want to get you soux me.”

An Update on Wesley

They update listeners on their new kitten, Wesley Crusher West.

Kyle is hating having a litter tray in the house.

They discuss how Wales’ 2-week national fire breaker, due to COVID-19, has meant they have had very little breaks from their children.

It has come over school half-term, Halloween, and Guy Fawkes.

Kyle thinks it would be more bearable, if his children still took a nap during the day.

Katie says that every day feels the same, and that it reminds her of the film Groundhog Day.

She admits that she has personally never seen that film, which shocks Kyle.

Kyle tells her that he saw the film in the cinema, when he was a child, but has never seen it since.

“It’s just one of those things, ironically, that I don’t want to sit through again.” He reveals, despite enjoying the film.

The irony is not lost on both of them, given the plot of that movie.

Kyle says that he thinks Trekkies have the unfair reputation of being unsociable nerds, because outsiders don’t understand the journey that many Trekkies have taken to even become as sociable as they are now.

He says that, when he was in school, he could never admit to being a Star Trek fan. He would have been bullied.

They suggest that the fans who hate on Alex Kurtzman’s era of Star Trek, do so because they’re uncomfortable with Star Trek now being popular with a wider audience.

Kyle says that there is also always a very vocal minority hating on the newest editions of Star Trek.

Kyle reveals that this will be the last week that he and Katie will be discussing four Star Trek episodes, in the same show. At least, for now.

He promises to post an update on social media, of what episodes will be discussed next time.

Katie wonders why. Kyle tells her, it’s in case anyone is watching along with them.

He calls it “The Katie Pace”.

Katie reveals the Star Trek episodes being discussed in this week’s show.

After choosing to start with Star Trek: Voyager’s “Phage”, Katie describes the plot. This includes Neelix losing his lungs.

Kyle talks about how Kes gives Neelix a lung, via transplant. Says he would happily give both of his lungs to Katie.

She tells him that he “is not getting out of it, that easily!”, in reference to parenting their children.

Katie wonders how Voyager was able to beam Neelix onto a bed.

Kyle answers that it’s just one of those things a viewer has to accept.

He wonders if the Transporter operator has to play a game of Transporter Tetris, to get the person lined up correctly, for what they are beaming onto.

She is a big fan of this episode, and thinks that the Vidiians were gross.

She likes the story this week.

Kyle wonders how the Vidiians have survived this long, if they’ve been fighting their plague for over 2,000 years.

Katie is not warming up to the Neelix character.

Kyle feels that “Phage” did an odd job of trying to generate sympathy for the potential loss of Neelix, given it spent the first part of the episode showing viewers how annoying Neelix can be.

It made him not care for the character, so he wouldn’t have minded if his lungs were not replaced.

They both are unsure how Neelix could not have known about a species as aggressive, and deadly, as the Vidiians.

Katie is a fan of The Doctor.

She is finding him funny, and loves his bedside manner.

They both question the decision to wake Neelix, when he was in such a dire medical situation.

Kyle notes that when Captain Janeway tells the Vidiians that she lives by a set of Starfleet principals that prevent her from killing the Vidiian who stole Neelix’s lungs [to return them to Neelix], she doesn’t specifically say that she didn’t actually want to do it, just that she isn’t allowed.

Like Kyle, Katie is not enjoying the Tuvok character, so far.

Both of them are big fans of other classic Vulcan characters, such as Spock and T’Pol. Tuvok doesn’t come near to those, they say.

Katie questions his tactical skills, too, given he allowed Janeway to walk at the front of the tactical away team when they were attempting to track down the Vidiians.

Kyle agrees, and says that the injuries to Neelix should’ve been enough to have Tuvok insist that at least one security officer leads the way.

He wonders if it was due to the production team being worried that it would not be a good look to have a female Captain being hidden behind male security officers.

Next, they discuss the season one episode of Star Trek: Deep Space Nine, “Babel”.

Katie reads a description of the plot. They both note how eerily similar it was to the current COVID-19 global pandemic.

Kyle said that is was so weird, seeing the characters deal with the spread of a virus, much like people have to in the real world, right now.

Not a Miles O’Brien Episode

Both of them thought that it was an episode dedicated to Miles O’Brien, when it began. That turned out to not be the case.

Kyle admired how well the actors delivered their dialogue, when the virus had them saying words that made no sense with each other.

He thinks that, even though it was simply a case of learning dialogue, it must surely have gone against their own natural instincts to speak in such an incorrect way.

The Bajorans Did It!

Katie doesn’t let Kira off, for initially pointing the finger of blame at the Cardassians.

The mention of the weapon being planted at the time the station was built, was the first mention Kyle remembers of how old the Deep Space Nine station may be.

They compare this old virus weapon being activated, to how World War 2 bombs still get found in the United Kingdom.

Kyle compares the strength of Star Trek captains, and how they are always the last to be affected by anything, to how professional wrestlers suddenly are able to take much more damage at monthly pay-per-view events.

Katie is warming up to Deep Space Nine.

Kyle maintains that Deep Space Nine becomes a brilliant television series, and is confident she will grow to love it.

They arrive at the next episode to discuss. This time, it’s Star Trek: The Next Generation’s “The Last Outpost”.

This one did not go down very well, and that was mostly due to the Ferengi.

They both feel that the Ferengi were not presented in the way that they had been hyped up in previous episodes.

The Ferengi were a “joke”, they both agreed.

Kyle wonders if the Ferengi were high on drugs, which would explain their strange behaviour.

This is the first episode that Katie cannot give a thumbs up to. “It’s in the middle.” she tells Kyle.

He thinks that the episode fell apart the moment the characters beamed down to the planet’s surface.

Katie breaks down the plot of Star Trek: The Original Series’ “The Naked Time”.

A quick singalong happens, as they adjust the lyrics to Busted’s “Year 3000”.

Different to “The Naked Now”

Katie didn’t realise the connection to The Next Generation’s “The Naked Now”, until Kyle told her about it.

She put this down to the episode causing less sexual activity than “The Naked Now”.

It’s not as good as “Charlie X”, but Katie thought this was a fun episode. It just wasn’t a standout.

She admits that she’s starting to see past the production values, and the acting styles of the time.