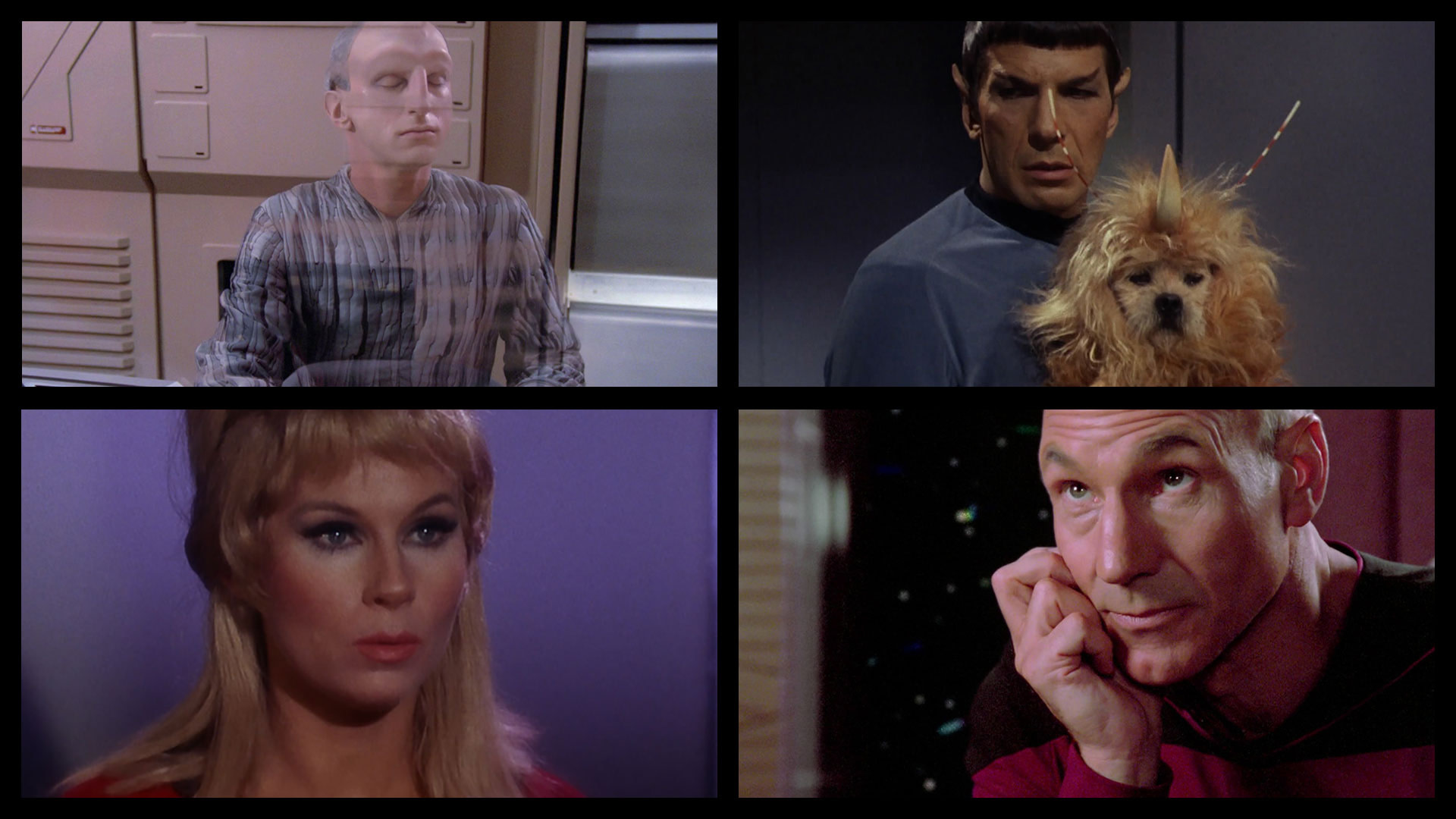 This week, Katie discusses a Star Trek: The Next Generation episode that she watched on her own, whilst Kyle confesses a big secret about his own solo viewing. All this, and more, including problematic writing in The Original Series’ “The Enemy Within”.

What to expect from episode 5: “The Ultimate Thigh Gap”?

The episodes covered in this edition of Her First Trek are (TOS) “The Enemy Within”, and (TNG) “Where No One Has Gone Before”, “Lonely Among Us”.

Please be aware that the discussion of “The Enemy Within” includes a long discussion regarding an attempted sexual assault within that episode.

Listeners who do not wish to listen to that particular discussion, can stop listening to the show at the end of the review of “Lonely Among Us”.

Kyle wonders why Katie is always so quiet, once they begin recording a show. Because she feels pressured, she reveals.

On this occasion, she feels pressured because they are streaming this episode of the podcast live on Twitter, via their Blast Shield! A Star Trek Lower Decks Podcast account.

They are only live on Twitter, because Kyle thought, “why not?”.

They joke about how Kyle has to manage Katie’s vocal levels, whenever they record.

She’s guilty of being too quiet, on many occasions.

They’re both stunned at how quickly they have got to their fifth episode of Her First Trek.

Kyle asks Katie how many episodes of Star Trek she thinks she has watched for this podcast. She guesses 20, which is close!

He confirms that she has actually watched 22 episodes of Trek.

In this episode, they will be changing it up. Kyle says that, instead of covering an episode from the first four Star Trek shows, they will instead only be discussing The Original Series and The Next Generation.

Katie chose the selection, this week. She thinks they go well together, tonally.

Out of nowhere, they break out into song, which somehow leads to a discussion about using abbreviations in speech.

Star Trek Pictures on the Wall

Kyle is very happy, because Katie has allowed him to put some of his Star Trek pictures on the wall of their lounge.

One is a limited edition print of Seven of Nine. Another is a promotional shot of Christopher Pike. The final one is an image of all the Star Trek: Enterprise crew, and their ship.

Kyle has “a proper drill now”, which is how he has been able to redecorate his lounge. He’d unknowingly been using a drill designed for simply tightening screws, previously.

Where No One Has Gone Before

The first episode they are discussing, in this episode, is Where No One Has Gone Before. This is from season 1 of Star Trek: The Next Generation.

Katie watched this episode on her own, with pizza and wine. She enjoyed the experience of watching Star Trek on her own.

She says it was a good night.

Katie says she enjoyed the episode, even if it was a slow burner.

She was surprised that Kosinski was not the villain of the episode, but has trouble saying his name on this podcast. Instead, she confuses his name with that of Natasha Kaplinsky.

Kyle has no idea who that is.

Soon, he realises that Katie has confused Natasha Kaplinsky with Monica Lewinsky, which is even more random.

Katie thinks that Natasha Kaplinsky may be a news reader.

Katie says that she thought Kosinski would be the villain, so it was a surprise for her that the Traveller took that role.

Kyle confesses that this is a surprise for him, too, as he fell asleep when he was watching the episode. Katie isn’t happy. Kyle blames it on trying to stay awake too late.

A Wall of Fire

When Kyle woke up, he saw Jean-Luc in front of a wall of fire. He’s still confused, even now, as to what he had missed.

Katie doesn’t remember this part of the episode.

She enjoyed the episode, particularly the [kind-of] hallucinations.

After discussing “Where No One Has Gone Before”, they move onto the next episode of The Next Generation, titled “Lonely Among Us”.

Kyle summarises the plot, for listeners. He thinks this is an “interesting” episode.

Katie thought that the aliens, from the beginning of the episode, would be more important to the plot. They weren’t.

Kyle is annoyed that viewers didn’t get to see the resolution of the plot. The plan didn’t work, but we weren’t shown that, we were only told it.

They are both a bit unimpressed by the senior crew backing off, after trying to relieve Captain Picard of his duties.

Kyle isn’t sure why senior staff have that power, if the captain can overrule it, as seen in this episode.

Katie imagines that using the transporter makes you tingle.

Kyle says his left thigh is currently tingly. Katie tells him that this is because he is transporting.

She asks where he would like to transport his left thigh to. He wants to send it to bed.

A Constant State of Regeneration

Kyle wonders if he could continuously swap out different body parts, so that a part of him is always recovering in bed.

“A constant state of regeneration,” he calls it.

Katie thinks it would be harder to do things, with only one full leg, and a detached calf. Kyle says it would be like Starfleet ships in Star Trek: Discovery’s third season, where programmable matter allows the nacelles to work without being attached to the ship. His leg would work just fine.

Katie considers that to be the ultimate thigh gap.

So far, Katie has not been impressed by Worf. Kyle agrees, thinks that Worf is much better by the time he joins Star Trek: Deep Space Nine.

“As Family Guy said, his head looks like a fanny.” Katie finished.

Discussion moves onto “The Enemy Within”, from Star Trek: The Original Series.

Katie finds out that their son has watched this episode with Kyle, previously. She correctly guesses that he then roleplayed as Evil Kirk, afterwards.

Kyle thinks that, for 1960’s TV, they covered the attempted sexual assault scene as much as they could.

Katie feels super uncomfortable by the ending of the episode, in which Janice Rand apologises to Captain Kirk for accusing him of attempting to sexually assault her.

Kyle agrees. It wasn’t until this viewing, that he realised how problematic the ending was. Especially given it was indeed a side of Kirk’s personality that attempted the sexual assault.

Katie has started to notice how much trouble Janice Rand has been having with men on the ship, in the episodes thus far. They use “Charlie X”, the previous episode, as an example.

Katie is not happy with the scene that sees Rand report the attempted sexual assault to Spock, McCoy, and Kirk.

Kyle is in complete agreement. Three men stood over a female assault victim, and not believing her story, is incredibly problematic and worrying.

Having the victim apologise to the man, is a real issue, for both of them.

However, Kyle doesn’t think the writers set out to create such problematic scenes. He thinks it may have been a result of the time this was written, and a lack of knowledge and education on the subject.

They agree that nothing like this would be produced now, in today’s world.

The Only Thing Stopping Kirk is His Decency?

On Rand and Kirk admitting that there is an attraction between them, Kyle is wondering if the episode purposely tries to imply that the only thing stopping Kirk is his decency?

He’s not sure what message that sends to other men.

The Episode is Quite Funny

They decide to move on from the problematic issues they’ve already discussed.

Katie admits that she thinks the episode is quite funny, if you only focus on Shatner’s acting as Evil Kirk, and some of the production choices.

Overall, Katie says that she does enjoy the episode.

Finishing up the episode, Kyle tells listeners that they can find out how Katie ranks the three episodes discussed, by becoming a Patreon supporter.