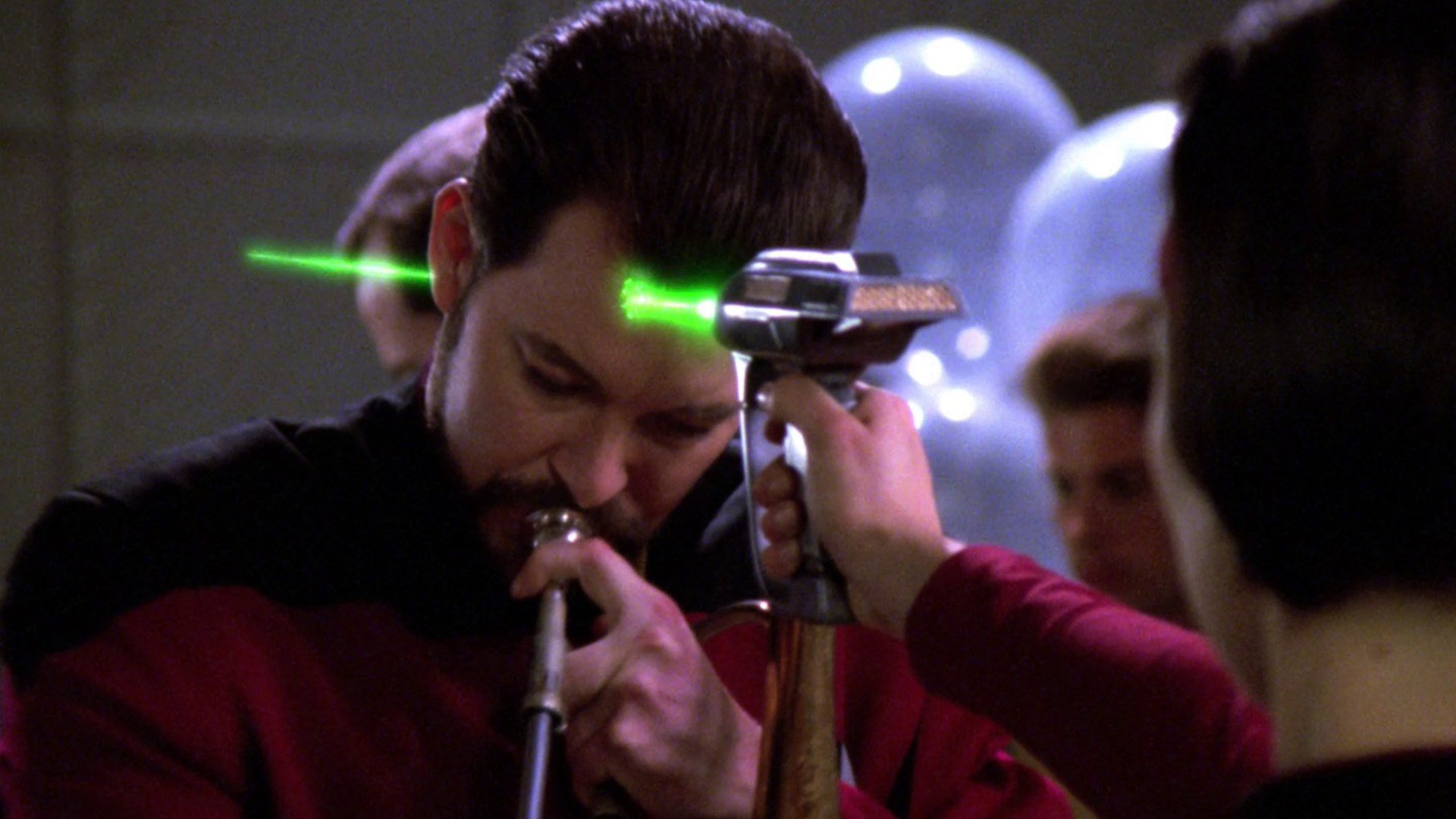 In the sixth episode of Beyond Farpoint, Geoff and Baz are joined by Baz’s wife Gem Greenland, and TrekRanks host Jim Moorhouse, as they discuss the wins and fails of Star Trek: The Next Generation’s technology. 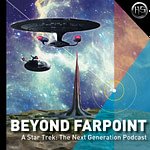 Geoff asks what everyone’s favourite piece of Trek tech is. Baz replies with the holodeck and Geoff agrees. Gem loves the transporters and has a particular desire for the personal transporters in Discovery’s third season. Jim would pick warp engines and be able to explore at light speed.

Geoff then starts talking about the failures in TNG, and opens up with holodecks. Baz comments that the holodecks break down a lot. Geoff then touches on holodeck usage in other Star Trek series, from TAS, through to Lower Decks and Picard.

Jim mentions ‘The Big Goodbye’ and ‘Elementary, Dear Data’ as tech failures, but that ‘11001001’ uses the holodeck more as a trap for Riker and Picard. After a minor diversion talking about Minuet, Geoff mentions DS9 using Quark’s holosuites for Vic Fontaine’s Las Vegas casino including the jack-in-the-box trap in ‘Badda-Bing, Badda-Bang’. Baz brings up ‘Our Man Bashir’ as possible the best example of the trope.

The Trouble With Transporters

Straight away, Baz asks what comes out the other side when you use a transporter? Does it kill you and then clone you? Jim doesn’t think so, and compares it to turning off a TV. Geoff mentions Realm of Fear where you see the transporter from a user’s perspective.

Baz mentions it cloning Kirk early on in Trek’s entire run, before going into body horror, mentioning the Vulcan first officer in Star Trek: The Motion Picture. Jim pours one out for the unicorn dog in The Enemy Within. Baz brings up justice for Tuvix and Jim asks if this is now a Tuvix podcast. Geoff mentions how the lack of trust in transporters when they’re shown as a brand new technology in Star Trek: Enterprise, and Jim mentions the transported crewman fused with plants in Strange New World.

Geoff contrasts the opposites of Tuvix and The Enemy Within and mentions Riker’s transporter clone from Second Chances. Jim responds with Scotty’s return in Relics but mentions the malfunction causing the death of Franklin.

They then have a discussion on The Next Phase. Gem mentions Data saving the Romulan ship, and goes on to ask why Ro doesn’t try to grab Picard to get his attention. Geoff asks about Ro shooting Riker with the phaser and not causing any damage. Baz asks why Geordi and Ro don’t phase through the floor and Jim gives a possible explanation. Geoff and Baz then compare Ro with Kira. Jim is glad that we still got Kira in DS9 but that Ro should have appeared, but Gem comments they wouldn’t have got on.

Geoff mentions Much Ado About Boimler where Rutherford accidentally beams Boimler out of phase. Jim mentions the half-a-rascal from that same episode which leads Baz to open a discussion on Rascals and the seven second Enterprise-D takeover. Gem likes three of the child actors but not so keen on the young Picard’s acting. Geoff asks why the ship is captured so quickly when besides Picard, the only other crewmen reduced in age are a botanist, a bartender and an ensign.

Baz and Geoff briefly touch on the development of the Ferengi over the run of TNG and DS9. Baz talks about the young Keiko and the young Guinan and mentions that it wouldn’t be the only time she played a young Whoopi Goldberg as she also plays her in Sister Act. Gem talks about young Guinan’s wisdom and gravitas to be able to convince Ro into behaving as a child.

Baz ponders on why it takes the two holographic gangsters so long to vanish when they leave the holodeck and Geoff compares it to the EMH’s early confinement to Voyager’s sickbay. Baz commented on how much he enjoyed his recent rewatch, but Gem disagreed as she dislikes Star Trek pretending to be something else.

Holodeck safeties are brought up as Whalen is injured by holographic bullets, which would also defeat the Borg in First Contact. The Picard/Crusher season 1 relationship is touched on.

Minuet is discussed again as Baz comments on how creepy Riker is in the episode. Gem agrees and comments on how picky Riker is with how Minuet looks. Geoff comments how shameless Riker is to do all this with the Bynars still in the background. Jim quotes Mariner from Lower Decks saying that’s what the holodeck is used for.

Riker is singled out but everybody in the ship is doing it, and Geoff comments that Geordi uses it for practice, creating his own fantasy version of Leah Brahms on the holodeck. Baz comments on how good the Bynars are and that they felt the need to capture the Enterprise to repair their planet.

Baz mentions that the replicator would solve world hunger and it would be the most useful in the modern world. Jim compares it to modern-day 3D printing and mentions how much we would have liked the communicator at one point. Now our mobile phones are more like tricorders.

Gem mentions that hyposprays are becoming a reality. Geoff and Jim discuss the differences between Star Trek padds and modern Tablets.

Jim brings up Artificial Intelligence and Baz comments on how scary the robotic dogs are. Gem comments on how likely AI is to take over our jobs over the next 25 years. Jim mentions the gap in technology between the first flight to landing on the moon. Geoff mentions the move from space travel to private industries and the likes of Sir Richard Branson’s space ventures.

Jim mentions androids and can you transfer consciousness. Geoff asks about the concept of the soul. Baz mentions on how AI is portrayed in Picard and Discovery as more of a darker concept. Jim brings up What Are Little Girls Made Of, The Schizoid Man and Et in Arcadia Ego.

Geoff brings up AI in self-driving cars from Google and Tesla and whether he’d want to get into one, but he’s still impressed by Cruise Control in his car. Jim is fascinated by the technology and Geoff brings up the experimental motorsport RoboRace.

Jim and Baz talk about the speed limit brought in for Force of Nature, and how they tried to work around that in later episodes of TNG, DS9 and Voyager. Geoff responds with the soliton wave tech introduced in the TNG episode New Ground and how a ship could get stranded at warp speed.

Gem asks about why ships in Star Trek travel slower than necessary as slightly increasing warp speed would get you a lot faster. Star Trek: The Motion Picture is brought up again as Geoff asks why the Enterprise ends up in the wormhole when travelling at warp.

The conversation comes to a close as both Gem and Jim are thanked for their appearances.