In this episode of The Vedek Assembly, Brandi, Liam, and Nick welcome their first guest (and Kai), Ketwolski, to talk about the cultural impact of Captain Benjamin Sisko. 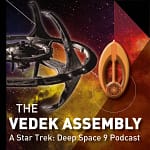