Basics 1. Be careful not to suffer from exploding desk syndrome or shear stupidity and let a bunch of half-wit Kazons and Seska peck you to death like ducks and steal your ship! Join Liam and Suzanne in part 1 of the season 2 finale. 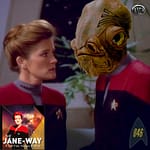 The Jane-Way - A Star Trek Voyager podcast
46. It's a Twaaap!

Ah Seska. Trust Seska to make sure she somehow manages to steal Voyager, dupe everybody, have the Kazon wrapped around her finger, and just be damn awesome.

There are many issues with this episode, even though its good. You’ll have to listen to the podcast to find out. I’m too tired and rushed to get this out to you!

FIRE ALL PHAZONS! ITS A TWAAAP! Honestly, why is Chakotay the only one thinking that is a trap? Surely they are highly intelligent individuals with a brain between their ea… Oh, wait, no, this is Voyager we are thinking of! The ones that picked up Neelix and still use his advice, or the ones that CONSTANTLY underestimate Seska. Anyway…

Interesting Kazon ‘sects’ if you know what I mean… Also, do ducks really peck? Do they have pecking ability? CAN THEY LEARN THE MOVE PECK IN POKEMON (I should know this). Suzanne thinks not. Liam thinks yes. IT IS A MYSTERY.

Would you rather ‘Do the Nistrom” or the renowned ‘Relora Nipple Tweak’?

Allowing that Kazon on board was a right way, surely? Following a dodgy transmission from Seska blindly without thinking ITS A TWAAAP its probably the wrongest of all wrong ways. Getting a boner over Suter’s plant things is definitely a Jane-way.

What do you think? Listen, and let us know!

The Jane-Way - A Star Trek Voyager podcast
46. It's a Twaaap!