Threshold. NSFW. Liam and Suzanne throw open their space doors to special guest, Brandi, to talk about one of the more… out there episodes of Voyager. Does Neelix get waxed, is Janeway ‘sturdy,’ and just what does Paris Delight taste like? 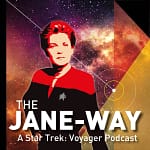 
What to expect from episode 35. Glorified Magikarp?

Liam and Suzanne invited their very special friend, Brandi Jackola (previously on the episode about Jetrel, “He Blinded Her With Science”), through their space doors and back onto the show to talk about one of the most ‘loved to hate’ episodes of Star Trek, “Threshold.”

This season two episodes features a sound sci-fi storyline by which Tom Paris breaks the theoretical barrier for speed, Warp 10, and the consequences of such achievement. Ordinarily, this would be a typical Star Trek episode but, oh no, this is Voyager! We have to do something ~cRaZy~! So Tom ate too many rare candies and hyper-evolves into a lizard/salamander/axolotl/catfish (the hosts cannot agree), kidnaps the captain, who also turns into lizard/salamander/axolotl/catfish, assumedly have passionate intercourse, and have children… Which are then left behind on a random planet by Chakotay and Tuvok… All of which is never spoken about ever again. At least the makeup was good, right?!

Liam and Suzanne welcome Brandi, who reels off the long list of Star Trek podcasts that she is on that you should check out. Liam is still in his damn hotel, and Suzanne is… Suzanne.

This is a very NSFW episode and we laugh so much that it started hurting. Cannot say much more than that!

The Right Way, the Wrong way, or The Jane-way?

We forget in the show to actually provide the results but it was caught in editing so you are welcome! Do you reckon leaving the babies in the planet was a right way? Was it the wrong way to let Tom go on the manned test flight? Or is everything just… The Jane-way? Take a listen to find out.