4. Sci-Fi in Starlog Magazine Issues 7 and 8

Nayr and Kavura discuss the science fiction articles that were in Starlog magazine issues 7 and 8, originally published in 1977. Highlights; Robby the Robot, Space: 1999, Saturday morning television, Star Wars, and more! 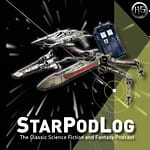 Starlog Had So Much Stuff!

Nayr and Kavura take you through these magazines with a nostalgic look at what was cool. There’s also the miscellaneous stuff like letters, conventions, and classifieds for things you wouldn’t see today!

Starlog had a huge article on this new movie called Star Wars before its release. No one knew at the time that it would be such a huge it!

The spacecraft of Space: 1999, the Eagle, was an extravagantly built model for the ’70s.

Nayr and Kavura discuss this article about how one sci-fi fan went to incredible lengths to restore his favorite movie from 1950.

Your hosts discuss his Starlog article about a classic Vincent Price movie about a man’s separation from humanity.

Every child from the ’70s remembers watching television on Saturday mornings with a bowl of cereal. There were cartoons like the Superfriends and campy live-action shows like Electrawoman and Dynagirl.