A Review of Columbus Day, Book 1 of the Expeditionary Force

Episode 1, Columbus Day of The Fluffernutter reviews Columbus Day, book one of the Expeditionary Force book series by Craig Alanson. Steve (AKA MidNite Shadow) and Nathan are joined by guest host, Steve Damm to review this book and audiobook. 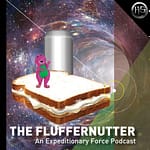 Getting into Columbus Day and the Expeditionary Force series

The monkeys start the show by describing how they got into the Expeditionary Force (“ExForce”) book series.

For MidNite, Nathan started him off when discussing his plans for The Flutternutter podcast. Nathan found the book series by searching for R.C. Bray narrated books.

Steve Damm began when his family chose the next audiobook to listen too.

Where it all began

With the two primary hosts being British, they used this opportunity to ask an American what Columbus Day was.

Next, the boys started discussing the invasion of Earth, the “Barney Truck”, and if Joe would do it all again.

Questions were asked about American troops in Nigeria, and why more military troops did not have a history of serving in Iraq or Afghanistan.

As the team moved to the space elevator, they started discussing how the book showed more of a plan for a series of books. Usually, they find a book series expanding from the first story.

In the book, Joe Bishop states how he uses Wikipedia a lot, and he is not the only one!

And away they go!

The monkeys continue to discuss everything from Kristang ships, the book’s structure of explaining what is happening and the universe, the humour, left-handed rifles to Joe’s promotion.

Briefly mentioning Camp Alpha, the group move on to the topic of Paradise, where they talk about the smell, The Burgermeister, Lester Cornhutt, Major Emily Perkins and more.

Discussions progress to Joe ignoring illegal orders, and doing what he feels is right. Along with him heading to jail before breaking out and meeting what will become the crew of the Merry Band of Pirates, Craig’s use of strong female characters, before talking about Skippy.

When talking about Skippy, Steve Damm tells us about how his wife is lobbying for her workplace to have R.C. Bray to voice Skippy for their AI.

They also discuss would Skippy be that different if another person found him instead of Joe? And laugh about when Bishop finally introduces Skippy to the volunteer force once they hit orbit.

Next, the ships, The Flying Dutchman and The Flower are discussed, along with the use of science fiction references in the story from the likes of Star Trek, Star Wars, Independence Day and more.

Not much time was spent discussing the attack on the asteroid. Still, Skippy forgetting to mention the ComBots in the planning stages and Spacesuits were reviewed!

Before too long, the cast moves on to book’s storyline of returning to Earth, the President of the United States, and, of course, cheeseburgers.

Listener’s reaction on social media to episode zero‘s revelation that Steve “MidNite Shadow” eats fluffernutters with chicken got a mention. Now Steve has the idea of adding bacon!

MidNite quickly wants to talk about the scientist, Doctor “Smirky McJerkoff” Constantine, as they wonder if he was based on someone in Craig Alanson’s life.

Steve Damm then asks the question, if the hosts would join the second mission to return to space with the Merry Band of Pirates.

Next MidNite wanted to discuss why Skippy likes Joe so much.

The final topic turned back to food, as Steve Roberts wanted to address the meat generation used by the Ruhar on Paradise.

The Fluffernutter Podcast is a fan production. Craig Alanson owns the Expeditionary Force series, and all related marks, logos and characters.

This podcast uses clips from the Expeditionary Force series audiobooks under the fair use doctrine.

Audio used from the audiobooks is published through Podium Audio, distributed through Audible, and narrated by R.C. Bray.

All views made are that of the individual(s), and may not represent that of The Fluffernutter or the Holosuite Media network.