Starlog was a monthly science fiction magazine that began publication in the 1970s with a primary focus on the making of sci-fi media – books, films, and television shows – and the work that went into these creations. The periodical examined all aspects of geek culture and used interviews and features with artists and writers as its foundation. Join your hosts of StarPodLog, Nayr and Kavura, as they reminisce about this incredible magazine!

6. SciFi in Starlog Magazine Issues 11 and 12 May 3, 2021 - Nayr, Kavura, & guests discuss the science fiction articles that were in Starlog magazine issues 11 and 12, originally published in 1978. Highlights: The Prisoner, Superman, Star Wars, and more! END_OF_DOCUMENT_TOKEN_TO_BE_REPLACED 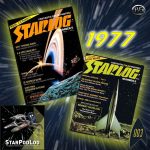 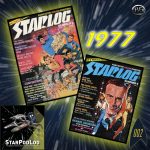 2. SciFi in Starlog magazine issues 3 and 4 July 14, 2020 - We discuss the material that is found in these issues from 1977: The Six Million Dollar Man, Space 1999, Made for TV Movies, The Outer Limits, etc. https://archive.org/details/starlogmagazine Hosts: Nayr… END_OF_DOCUMENT_TOKEN_TO_BE_REPLACED