In “Jetrel’s Poop Emoji”, Katie West shares her thoughts on two episodes of Star Trek that she has never seen before: “Coming of Age”, and “Jetrel”. Is Katie softening to Neelix? Is Neelix and Kes’ relationship icky? Also, a thirsty Wesley Crusher! 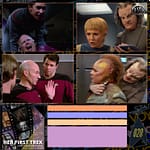 What to expect from episode 20, “Jetrel’s Poop Emoji”:

The episodes covered in this edition of Her First Trek are (TNG) Coming of Age, and (VOY) Jetrel.