14. The Road Not Taken: A Picard Season 2 Review

In the fourteenth episode of Beyond Farpoint, Geoff and Baz look at the latest adventures of Jean Luc Picard with guest Alex Perry of Weekly Trek, as they review season two of Star Trek: Picard 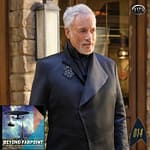 Beyond Farpoint
14. The Road Not Taken: A Picard Season 2 Review


What to expect from episode 14: The Road Not Taken: A Picard Season 2 Review

Introductions and thoughts about season three

Geoff welcomes Alex Perry, host of Weekly Trek and Trek Core contributor to Beyond Farpoint. Geoff, Baz and Alex also share their thoughts on the announcement that (almost) the entire cast of The Next Generation will be appearing in Star Trek: Picard season three

Overall thoughts on the season

Geoff, Baz and Alex share their largely positive thoughts on season two. They marvel at the old and new Guinans, the return of John De Lancie as Q, take some issue with him being side-lined. They also address the same pacing issues experienced in season one.

An episode by episode breakdown

Geoff, Baz and Alex all agree that season opener The Star Gazer was one of Picard’s best episodes. They also delve into the real-life parallels of the Confederation in Penance, discuss the Borg Queen and Agnes relationship and the very different type of assimilation in the third episode.

They all agree that Watcher, Fly Me To The Moon and Two of One have some good moments. But also recognise that this is where the season starts to spin it’s wheels. Geoff isn’t a fan of Monsters, while for Baz and Alex, it’s a season highlight. All agree that episode eight, Mercy, was unnecessary filler!

Talk turns to the powerful and harrowing conclusion of Picard’s mother’s storyline and the evolution of the Borg in Hide and Seek. They also discuss the emotional conclusion to Picard and Q’s relationship and rushed endings in Farewell

Geoff, Baz and Alex wrap up their thoughts on season two of Picard. Baz shares some thoughts on the show from Holosuite Media and Twitter.

Beyond Farpoint
14. The Road Not Taken: A Picard Season 2 Review

SpotifyAmazon MusicStitcherBlubrryDeezerRSSMore Subscribe Options
RSS Android by Email
Scroll Up
We use cookies to ensure that we give you the best experience on our website. If you continue to use this site we will assume that you are happy with it.Ok